This is the Transporter's baby brother!

This is the Transporter's baby brother!

Just read this on DRIVETRIBE


This is the Transporter's baby brother!

Posted on DriveTribe by Full Throttle. 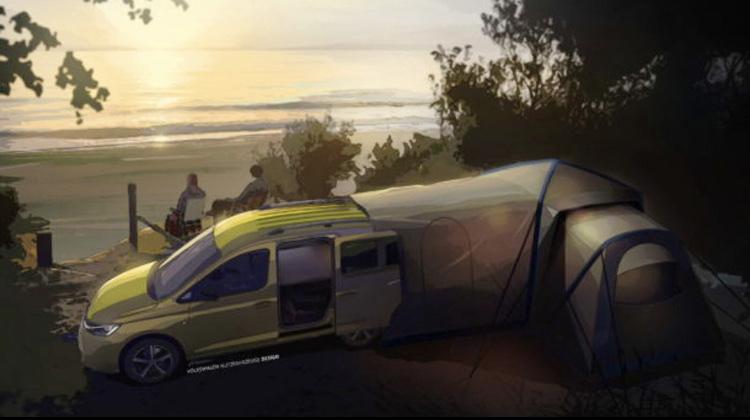 The Volkswagen Caddy is one of those forbidden fruits that we don't get here in the States, but with the recent success of the Ford Transit Connect, that could be about to change. The Caddy is VW's smallest van and comes in a number of variants, one of which is much like a shrunken Grand California. This small recreational vehicle is called the Caddy Beach camper, but now that there's a new generation of the Caddy, a new mini-RV is being teased by the German marque. In addition, this adventurous little van is getting a new name: the Mini-Camper. Based on the renders that VW has released, it looks awesome. The new model will be small, but thanks to a six-foot-long bed area with a folding rear bench and disc spring elements and windows that can be darkened along with the 15.1-square-foot panoramic glass roof, the Mini-Camper should be comfortable enough for adventurous owners to sleep in. The new model will also carry camping chairs and a table along with storage bags that can act as privacy screens. The teaser sketches also reveal a tent that can attach to the rear hatch if you want to really make the most of your camping trip. We expect that this tent could be an optional extra, but Volkswagen has been known to throw accessories in with specialized vehicles in the past. 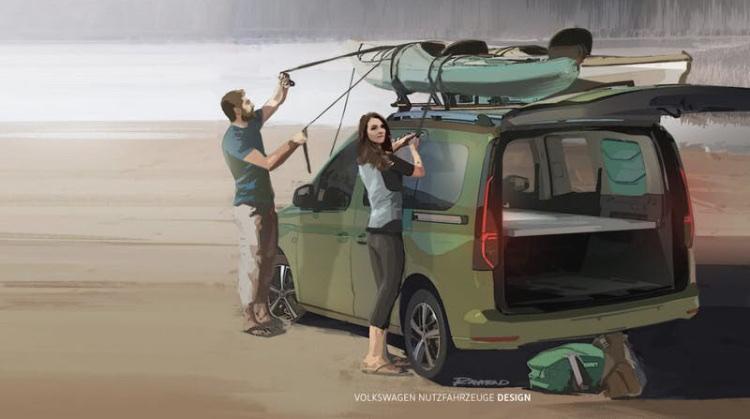 Volkswagen has really done its best to make this a helpful companion for adventurous couples and families, with the Mini-Camper reported to be coming with adaptive cruise control under VW's Travel Assist system, as well as blind spot monitoring with rear cross-traffic alert. Trailer Assist is also expected to be included, which should make towing your jet skis or boat much easier. We'll have to wait for final details when the new model is released in an online show sometime in September, but the prospects look good, and more small VW's are always cool.

If this does make it stateside it is going to be hugely popular. All of my friends there are very jealous of my Caddy. As some of you may know, European mini-vans are banned in the US, due to a "tit for tat" trade war on US chicken import into the EU ("Chicken tax"). The whole situation is insane, with even Ford (a US company) having issues with minivans (IIRC they need to import Transit Connects manufactured as passenger cars and then convert them stateside to panel vans). I expect part of the reason why VW is collaborating with Ford on the new Caddy is to circumvent some aspects of the ban.
Last edited by anoneamus on Sun Aug 02, 2020 9:21 am, edited 1 time in total.
Top

They would sell loads of these state side I’m sure of that. Maybe they have seen how popular they are here and like you say maybe they know they are able to sell in the USA.

Would be interesting to see which engine(s) they would use. Diesel is out, and US customers are not interested in smaller than 2.0L engines. Entry level Jettas there have 2.5L engines. The Beetle "sport" version has a 3.0L turbo engine (not available outside of the US).
Top

That article appears to be similar to the carscoops article which goes on to explain a bit more detail including the engine choices as follows..

Despite the "less polluting" description I am not too sure VW will find much appetite in the North American market for their diesels after the emissions scandal.

However carscoops reports that VW also will be offering a turbocharged petrol engine in the Caddy Beach models, with 114 HP (116 PS / 84 kW), which I suspect will prove the popular choice in North America, that is assuming they are not planning to use a 3 cylinder engine which will struggle to get any kudos in V8 land.
Top

Yeah, good luck to them, don't see this getting much traction in the US with that engine lineup. The (current) Transit Connect has 2.0L (150HP) and 2.5L (170HP) petrol engines and a (yet to be released, unspecced, presumably due to lack of interest) 1.5L diesel engine. If the new Connect uses the same platform as the Caddy, there would be zero reason to buy the VW. VW is pretty much dead in the US now anyway after the diesel scandal. Their only hope there is in the MEB platform.
Top
Post Reply