Lovely van mate, was it all straight forward?
Top

Hi @oliverbown
Wish I could say that, but in a way it was

?
Been into VW's for years, but used to be a full blown Vauxhall Astra man myself, then one day, they decided to stop making them, and the only other Van on the road with any Kudos at all was the Caddy, especially some of the real Rad modded ones.

My son's a sparky working in France, and his Vauxhall combi was dead on it's legs, so we decided to go for a Caddy (2012 1.6), and that's where It started. Couple of weeks after we got it, we lost an injector !!

, and you know where this goes

so we did a few little mods, Alloys/Tyres, Rear camera, new Head unit etc. etc, and then drove it down to France. On the way, yep, another injector, had this done at main dealer, and touch wood, Van has run sweet as a nut ever since.

Even this did not deter me, and I had started being on here because of the other Van learning stuff, and started going through a few of the build threads, and came across one (Mark1a's Blackberry Life), and I thought WOW

I need something like that. I started trawling the country for a Caddy Maxi Life at the VW main dealers, looking for a 17/18 Highline, low miles, but all of them were boggo standard, and very dear, and I knew I was going to need £5k or £6k on top of that price to even get near what I wanted, so then tried all the other usual suspects, Auto trader, eBlag etc, and came across Wolfsburg Vans, and finally found my Toffee up in Scunthorpe at Martin Atkinson Specialist vehicles, this Van had nearly all that I wanted, including seats, so we did a deal, and as they say, the rest is history. I collected the Van on the 10th Jan, and already have had 2 x tyres, a Vanstyle stone guard, Colour Instrument Cluster, Rear Camera fitted, Apple Car Play loaded, W8 and Provan Led interior lights, New R Line MFSW (Not fitted yet, waiting for Red backlit module from Germany) and still the list is sure to grow. Van booked in, and having a possible remap Monday after next, as my MPG is pretty poor to be honest.

Things still to do include, Having Geometry of the car checked, as 2 x existing tyres were pretty badly scrubbed on the inner, hence the 2 new budget ones

And I'd really like to have folding electric mirrors, with LED repeaters, and possibly puddle lights ?

After that, not sure, I just know, that I think the Caddy is a very very versatile, very sexy looking vehicle, whether it's in SWB, Kombi, or Life form, and personalising options are pretty much endless

Nice van, I bought mine from Martin pleasure
To deal with
Top

I've been on Nights for 6 weeks now, and I'm off this weekend, so wanted to get a few little jobs underway, especially as the weather is getting a bit better ? Anyway, opened the box today, and feel quite cheated, as there is NO manufacturer logo at all on the unit itself !!, I've seen other threads whereby they always have a Manufacturer logo on, in this instance mine has NOTHING !!

That's the part numbers I used for a 2017 150 TDI. Mine's a manual not DSG, and my engine code is DFSB. That said though, it sounds like the part itself is different, rather than the engine. If you bought it from VW, what did the picture of the part look like on their ordering system?
2017 Blackberry Maxi Life 190TDI 6MT OEM+
Santiago 18” | OE Xenons | Limo tints | Vanstyle side bars | Wind deflectors
Remap 190bhp | H&R / Darkside lowering | TRC front splitter
Android HU | 4G WiFi | Wireless phone charge
Build thread here http://caddy2k.com/forum/viewtopic.php?f=13&t=34095
Top

Is it just blank? Or a hole/depression?
I've seen people on here buying 2nd hand skoda ones and removing the skoda logo to reveal the vw one u derneath.....wondering if its in the box somewhere or a separate part?
Top 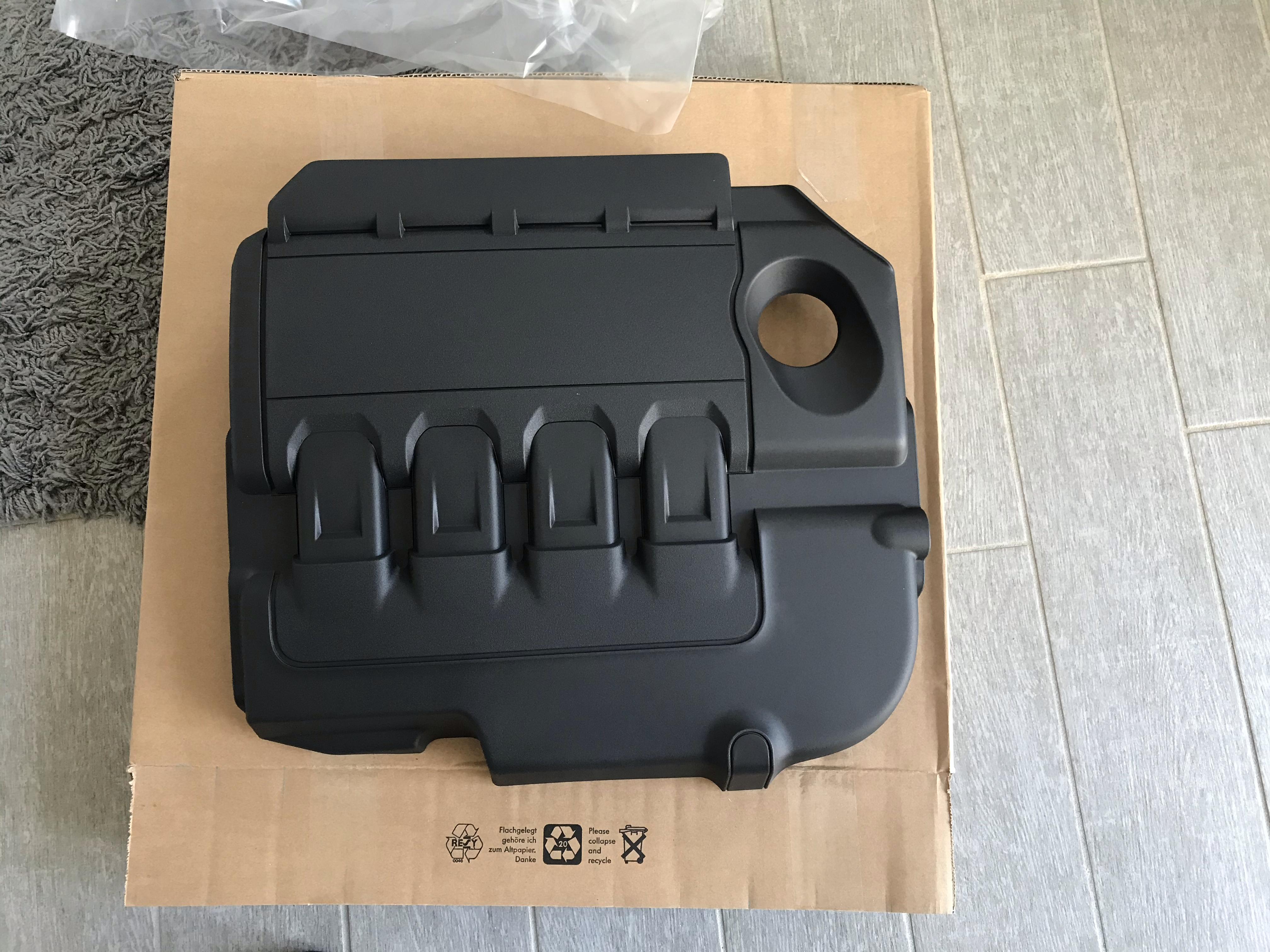 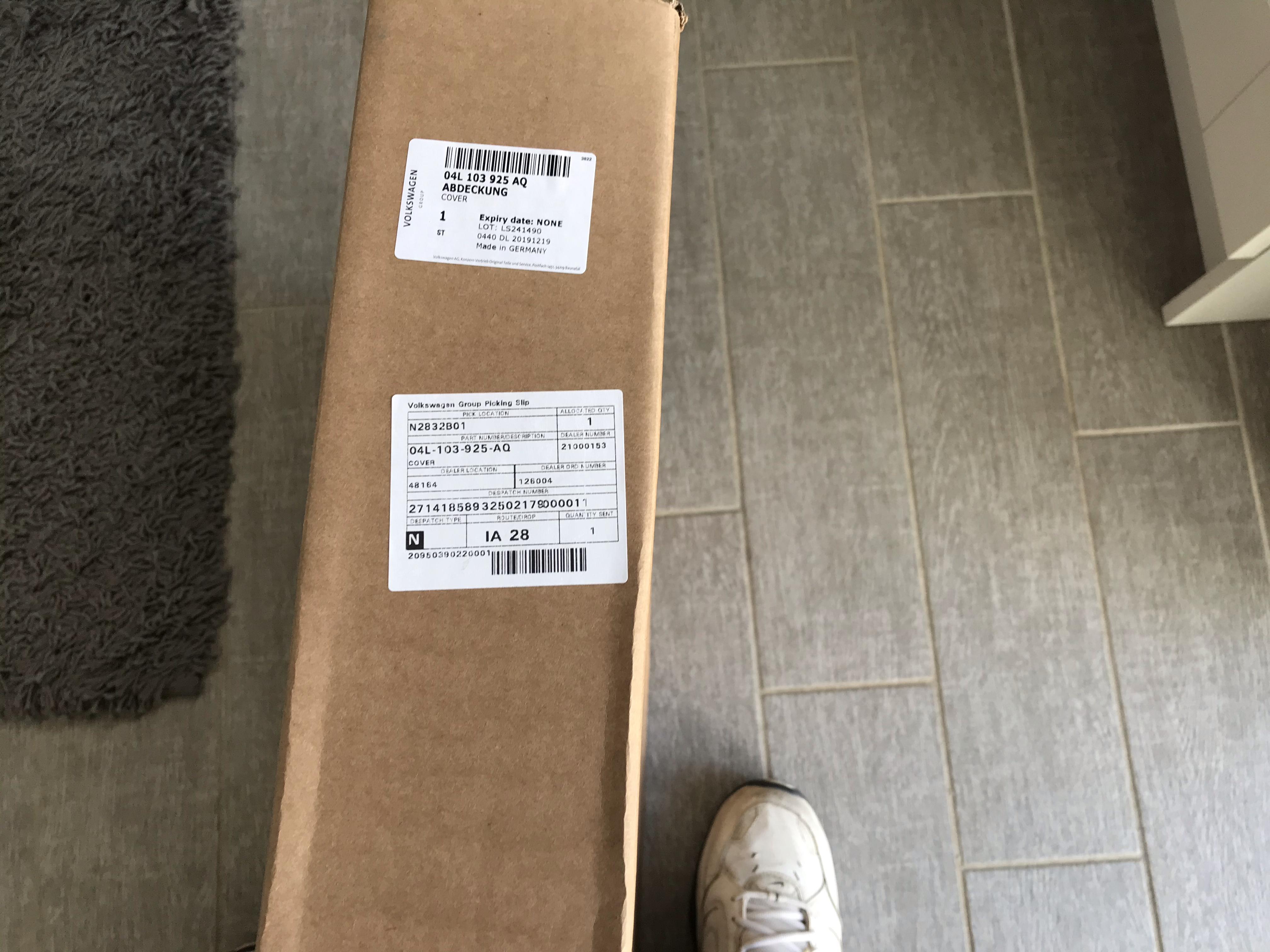 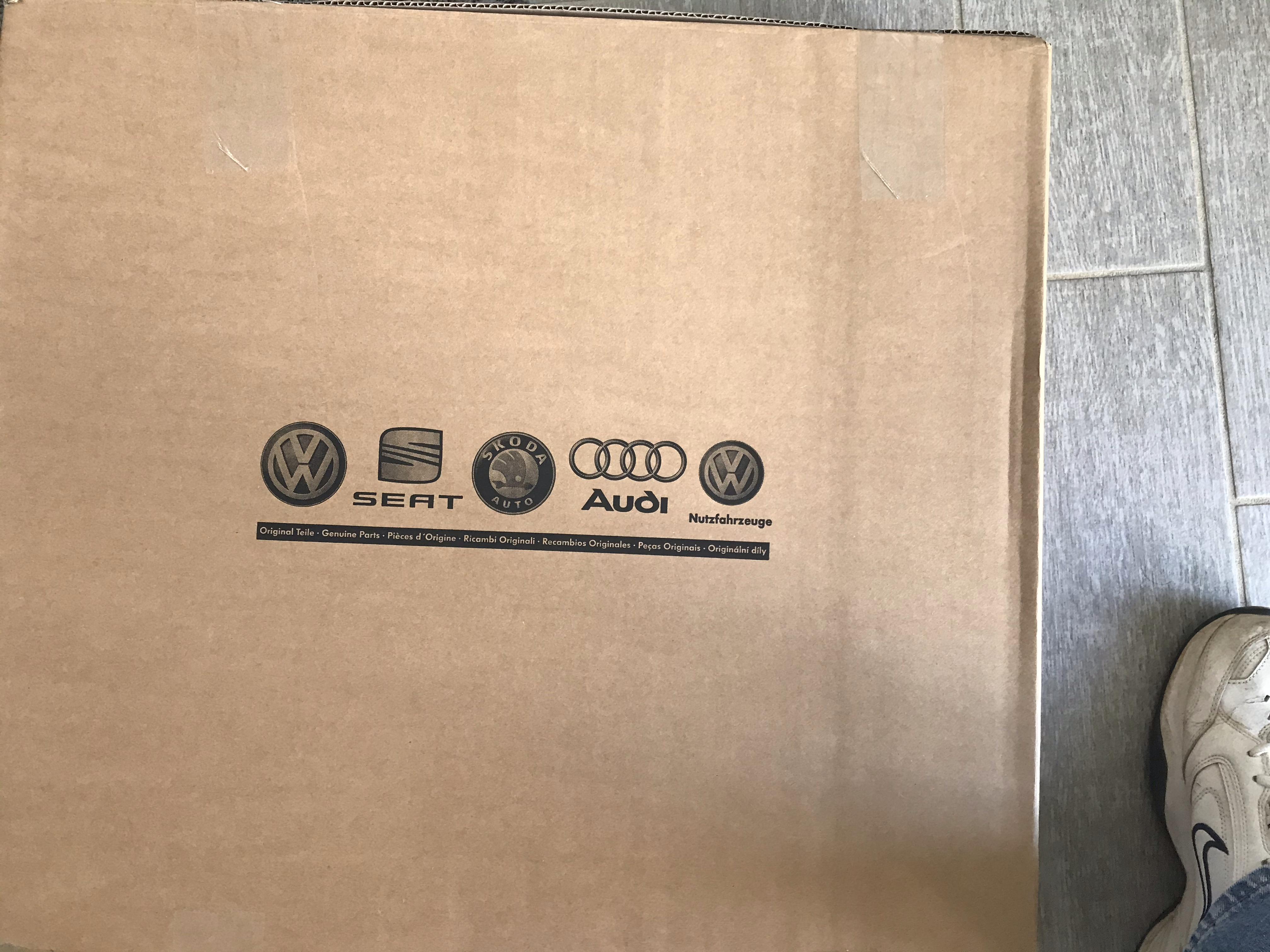 I’d actually prefer it if mine was like that as you could make it nice mate. Painted and with a proper badge on (like a bonnet badge) instead of the basic mounded plastic one.

Looks like VAG have "improved" the part by consolidating it across the brands. @Lister79 makes a good point, you could go to town on a proper badge providing it could be bonded in such a way that would handle the temperature. Good luck with whatever you decide to do.
2017 Blackberry Maxi Life 190TDI 6MT OEM+
Santiago 18” | OE Xenons | Limo tints | Vanstyle side bars | Wind deflectors
Remap 190bhp | H&R / Darkside lowering | TRC front splitter
Android HU | 4G WiFi | Wireless phone charge
Build thread here http://caddy2k.com/forum/viewtopic.php?f=13&t=34095
Top

Thanks chaps, and actually, I think you’re right, and I’ll look at options

I’ve got a question about the Dashboard tray, maybe someone could tell me what the small grey wire is that goes to the 12v socket outlet ? Comes up to plug from car, just Red and a Brown, and then from the other side of the plug to the outlet there is a Red a Brown and a smaller CSA grey wire ? 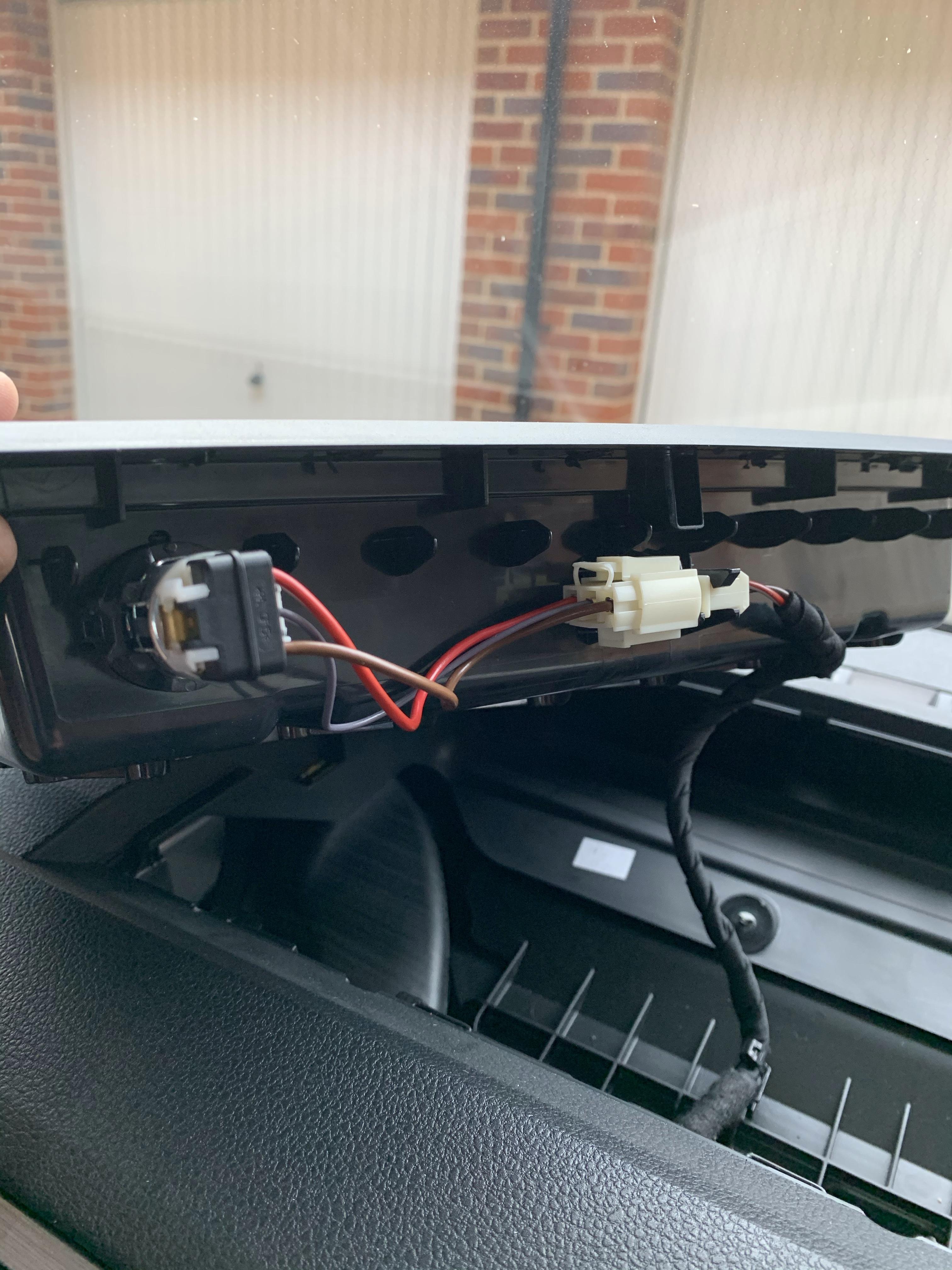 Grey with a bike trace is dash illumination.
Does the dash top socket light up when the headlights are on?

yes, indeed it does light up when in use

Thanks Doc
That socket, is the old style traditional cigarette lighter. I only have one 'true' USB port, and that is used pretty much permanently for my iPhone to run App Connect/Apple car play. So I'm thinking of doing a small mod to allow for extra USB's to charge her iPhone/iPad whilst in the tray.
I've got one of these multi plug systems, that have on/off switch/USB socket/Voltmeter/Cigarette lighter combined, and have got a second hand tray from a 17 plate, that didn't have the 12v socket out let. This unit (Amazon) is all Red Backlit, and will mesh with my existing lights, and compliment the W8 interior light conversion as well ?
I would keep an eye on any overload, and thought it was a nice looking little mod ? I'm pretty sure this won't bring up any errors ?, and at least doing it this way, I can always revert back, as I won't have drilled any holes in my OEM tray ?