hello to people of the internet

ive started a new project and thought i might do a build thread for a change.

i had a vw t25 panel van that i had been building for a good 6 months. the plan was to put a pd130 engine in it with a flipped passat box. im quite handy with fabrication and electrics. i managed to pick up the cleanest complete (turbo, loom, the lot) engine from ebay for only 200 quid!. the engine came from a university where they had it running on a bench to teach students about engines, its had 500 hours of use and they tell be its never been hammered. the turbo looks new, oil was perfect. after taking the cam cover off and realising i could eat my dinner off this lump i started to reconsider my choices on putting it in the t25. i need a new van for work soon and the t25 is no more than a weekend toy.

heres the lump as i picked it up

stuck the t25 on ebay and started looking for a clean shelled caddy with a knackered engine. stroke of luck came up and there was a decent shell just round the corner from me. with a shot gearbox and also a bit smokey full service history. new brakes and suspension. relatively clean and only one dent in rear door. inside is also carpeted and never been used as a builders van

and in her space 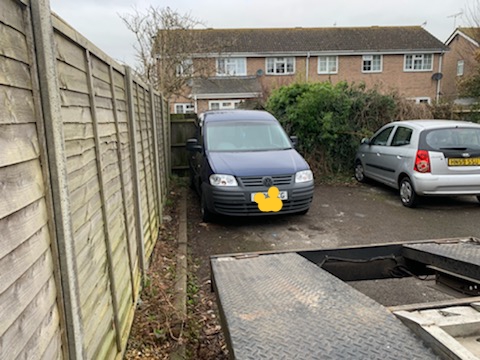 so work began last weekend to strip the engine down and label everything up. i was amazed at how easily it all came apart. i took the whole front end off in one piece, just uncliped all hoses ect and undon slam pannel and the lot came off 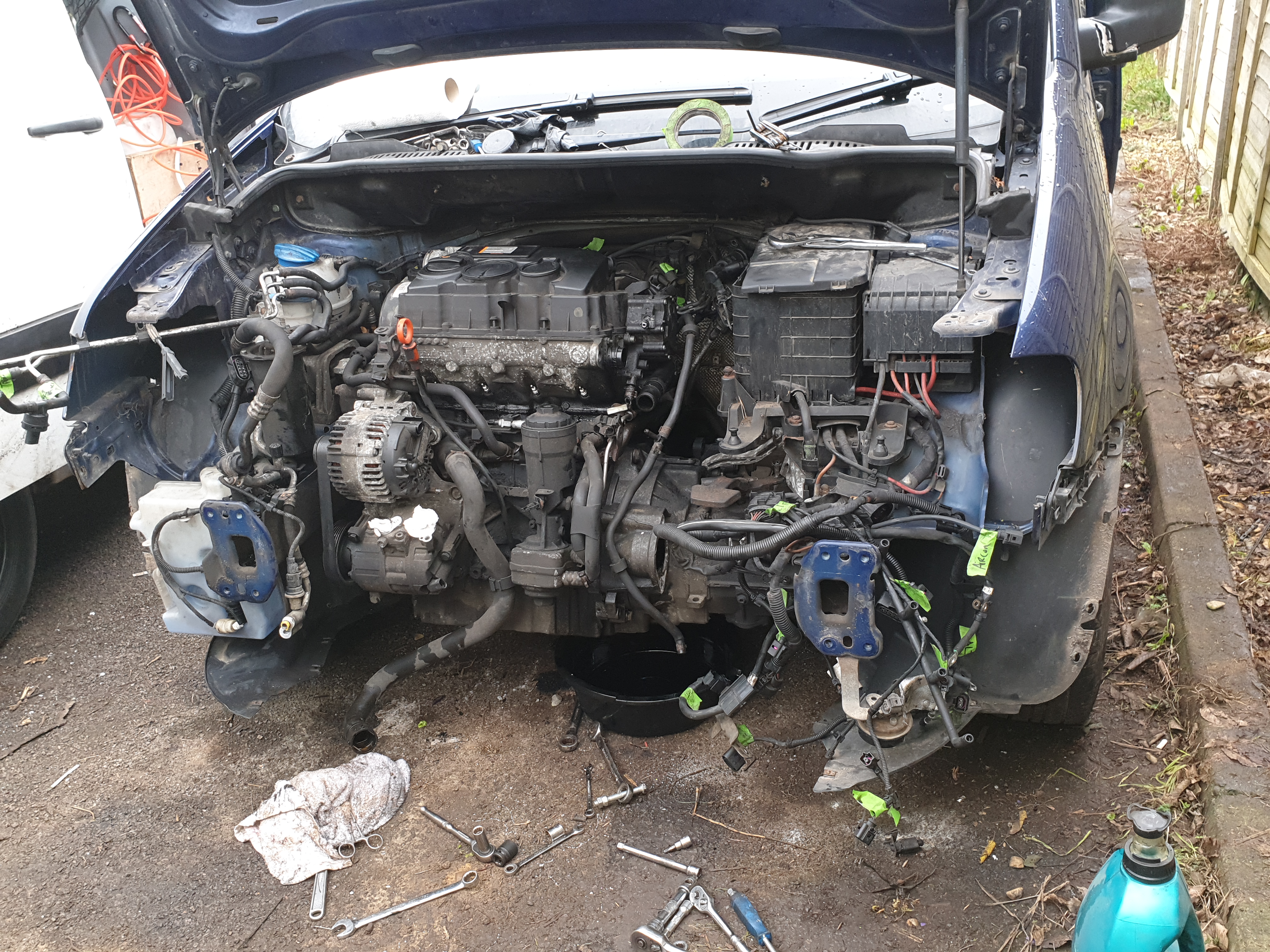 ive actualy taken this engine completely out now and it is defiantly fit for the bin. turbo is shot, gearbox shot, dmf isnt too happy

the original plan was to follow darkside developments thread on fitting a pd engine to the caddy but there were a few problems i had with this.
firstly i didn't want to spend a fortune on a new main oil seal some sensors and the tool to fit the seal totalling around £300. secondly the turbo actuator runs differently and i didn't want to buy another turbo when this one is pretty much brand new. thirdly if you say to most tuners can you transfer edc15 maps (which the pd130 runs on) to a edc16 (caddy) file they will tell you it cant be done or moan about it. after disusing this with a few guys i realise that not many people can do it and even if they could it would probably run like s#!t. my final problem was when i messaged darksides about it asking for a remote map so i could use my tuning cables and put one of there maps on and they told me i had to buy a box off them to write there files and then pay for the file afterwards. this is a absolute con as the box to write to the ecu is 250 quid and then shipping on top where as i can write a pd130 edc15 ecu with a 10 quid mpps cable and a 45 quid blacksmokes map if i wanted. (both of which i have at my disposal for free)

so with all of the ubove taken in to consideration ive decided to de-immobilise the pd130 ecu and splice the pd130 and the caddy engine loom together, keeping caddy bits that dont need removing and just having all sensor and controller wires from the pd130. ive done most of the hard work on this and managed to find a ecu pinout and labeled every wire on the back of the pd130 ecu and cutting the ones off i dont need. i dont se why this shouldn't work and im pretty good with that sort of thing but im open to opinions, will take some more piccys of wiring later 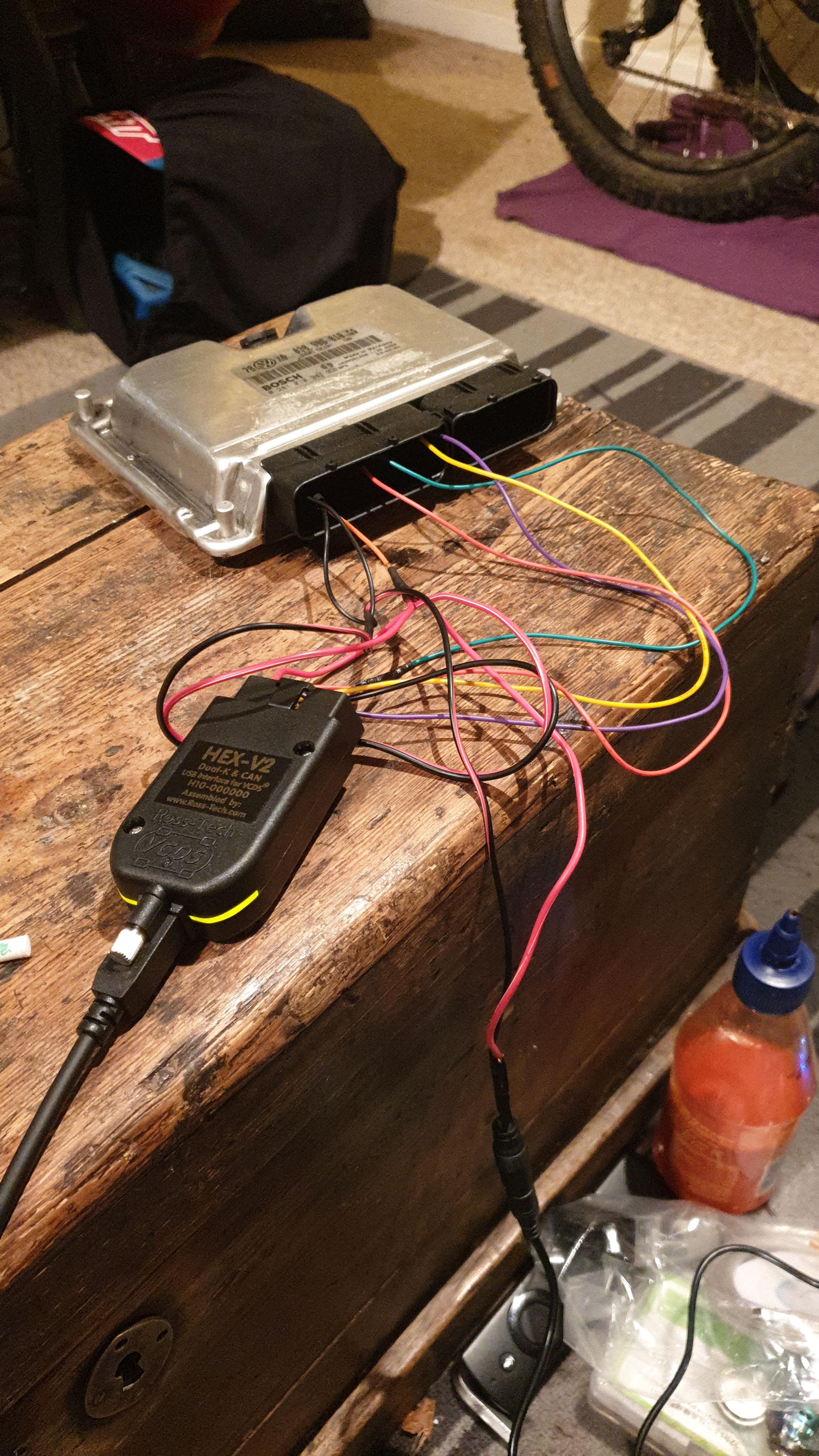 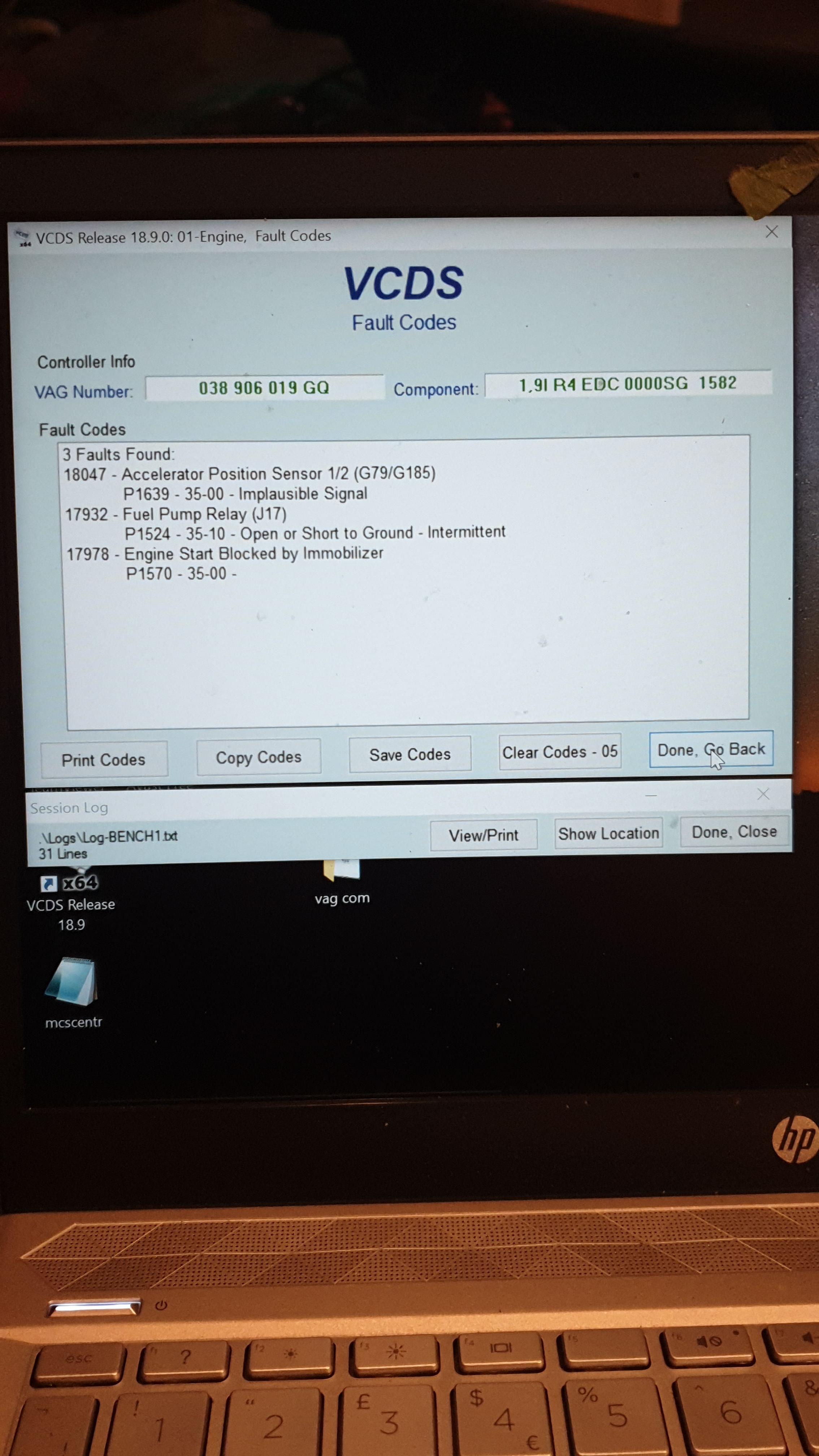 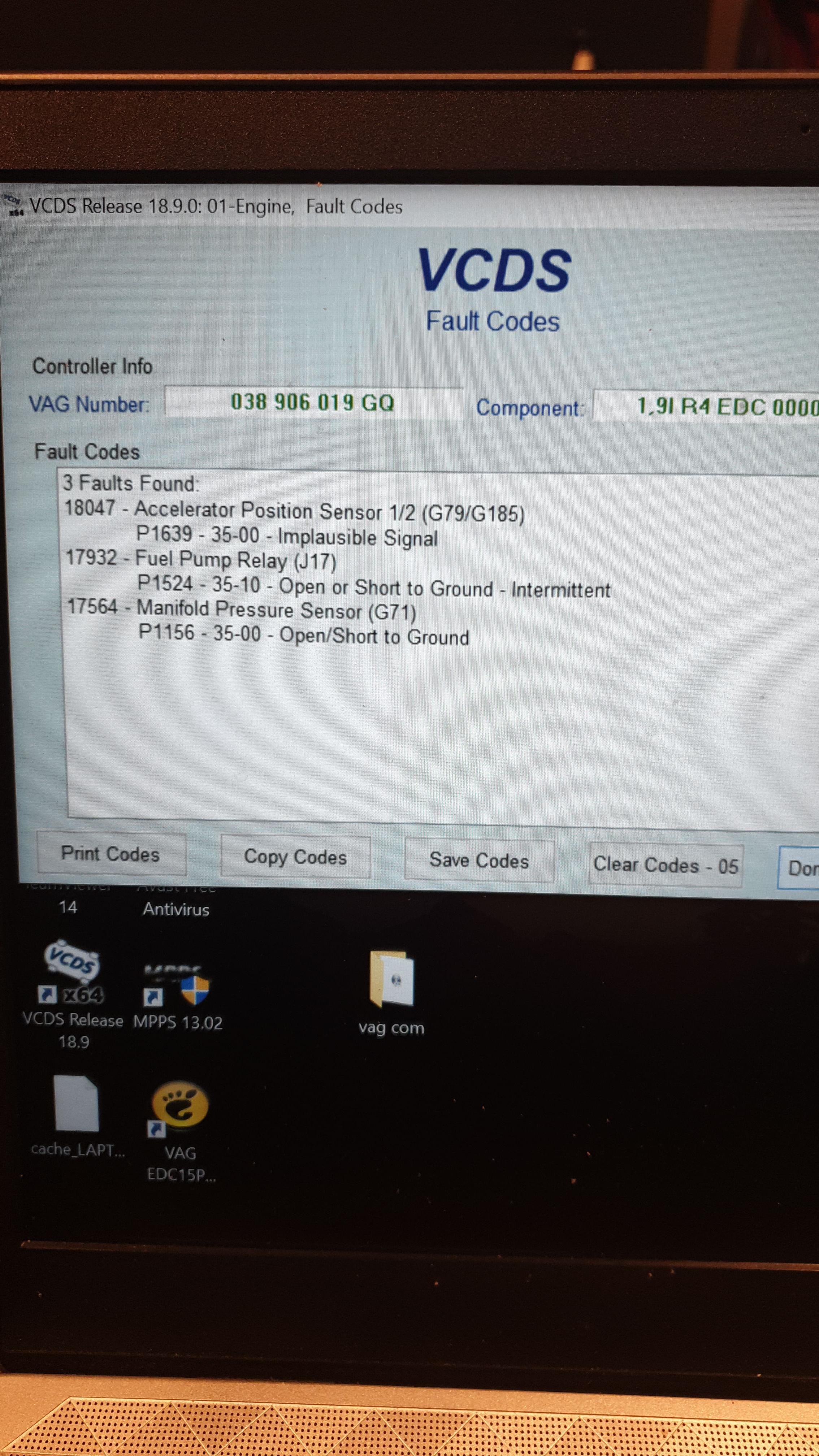 started assembling the gearbox with new clutch and dmf to suit 6 peed box. it looks as if the engine is resting on the oil cooler but i left one of the engine mounts from the uni on it just to keep it propped up while i tinkered 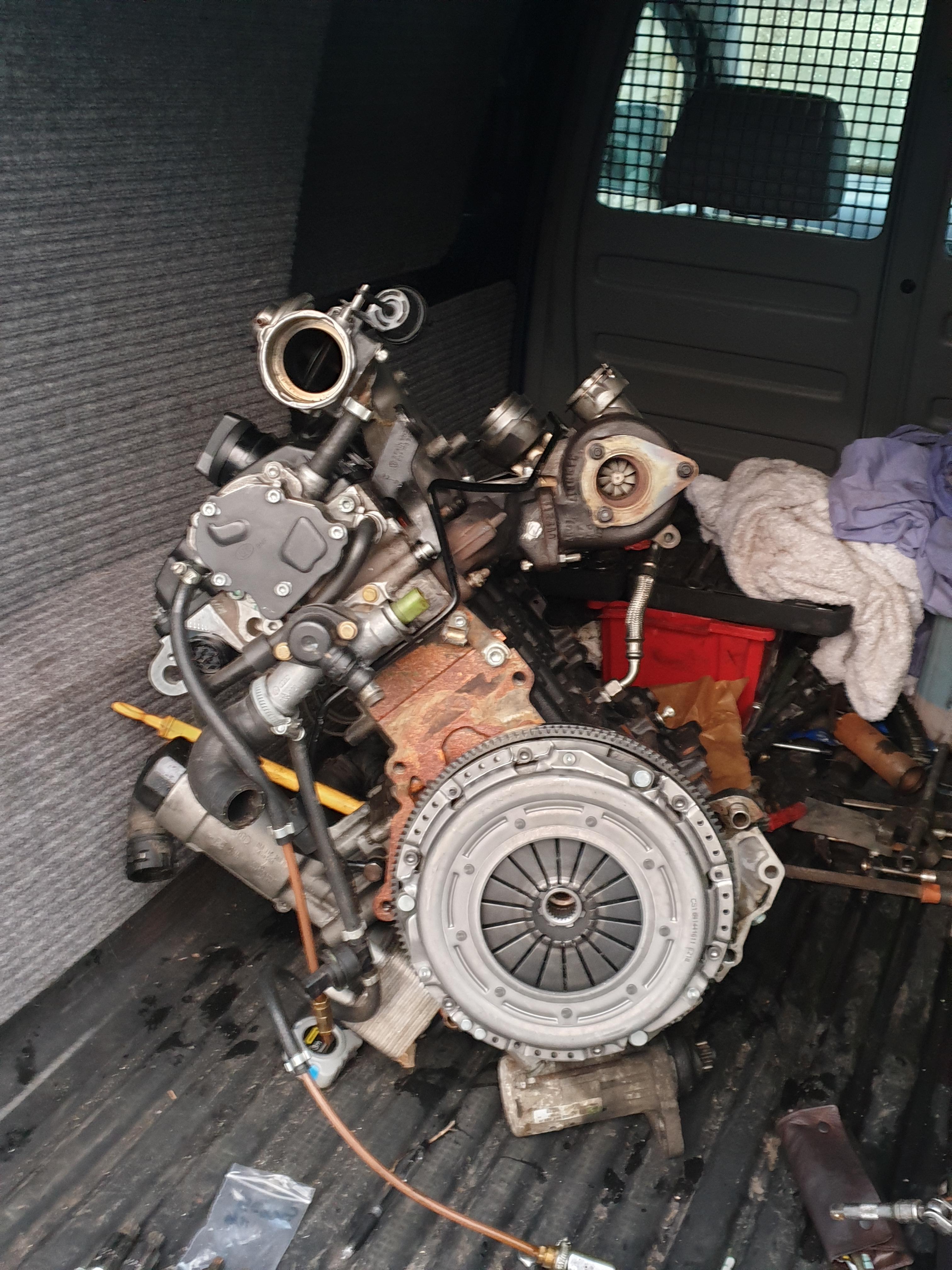 on to the gearbox....
i had a right steal with this. picked up a 120 quid 02m 6 speed box from the scrappy. looks mega clean and sounds smooth and i may be mistaken but im pretty sure it has a LSD in it when you turn the outputs they both turn the same way???. ive also re-drilled the shift arm to make it a short shift. not fussed about the lefty righty, just did the forward and backwards. orderd 2 brand new 6 speed driveshafts and im going to have to mate them to the caddy outer cvs if im not mistaken but we shall cross that hurdle in a few days time 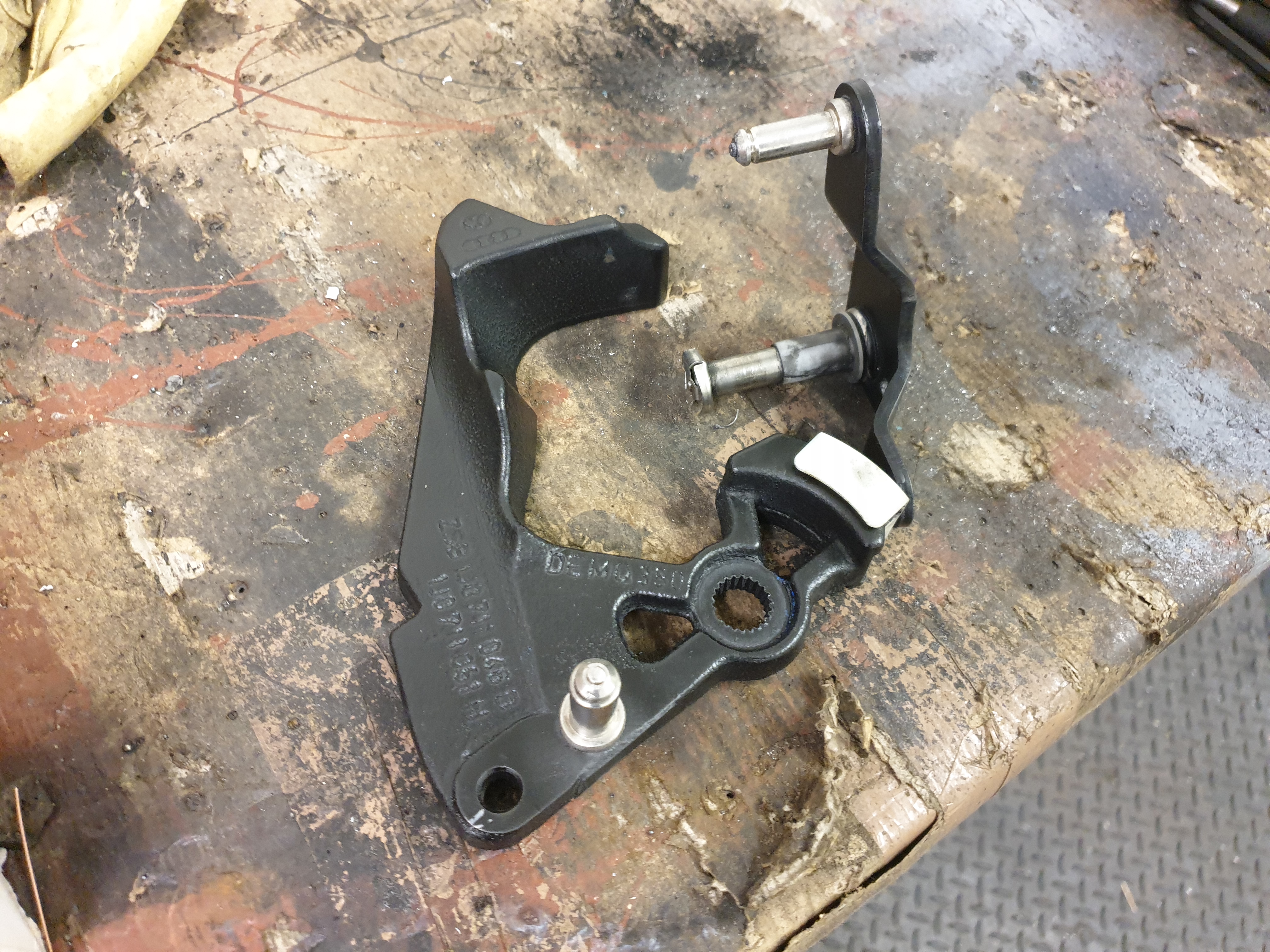 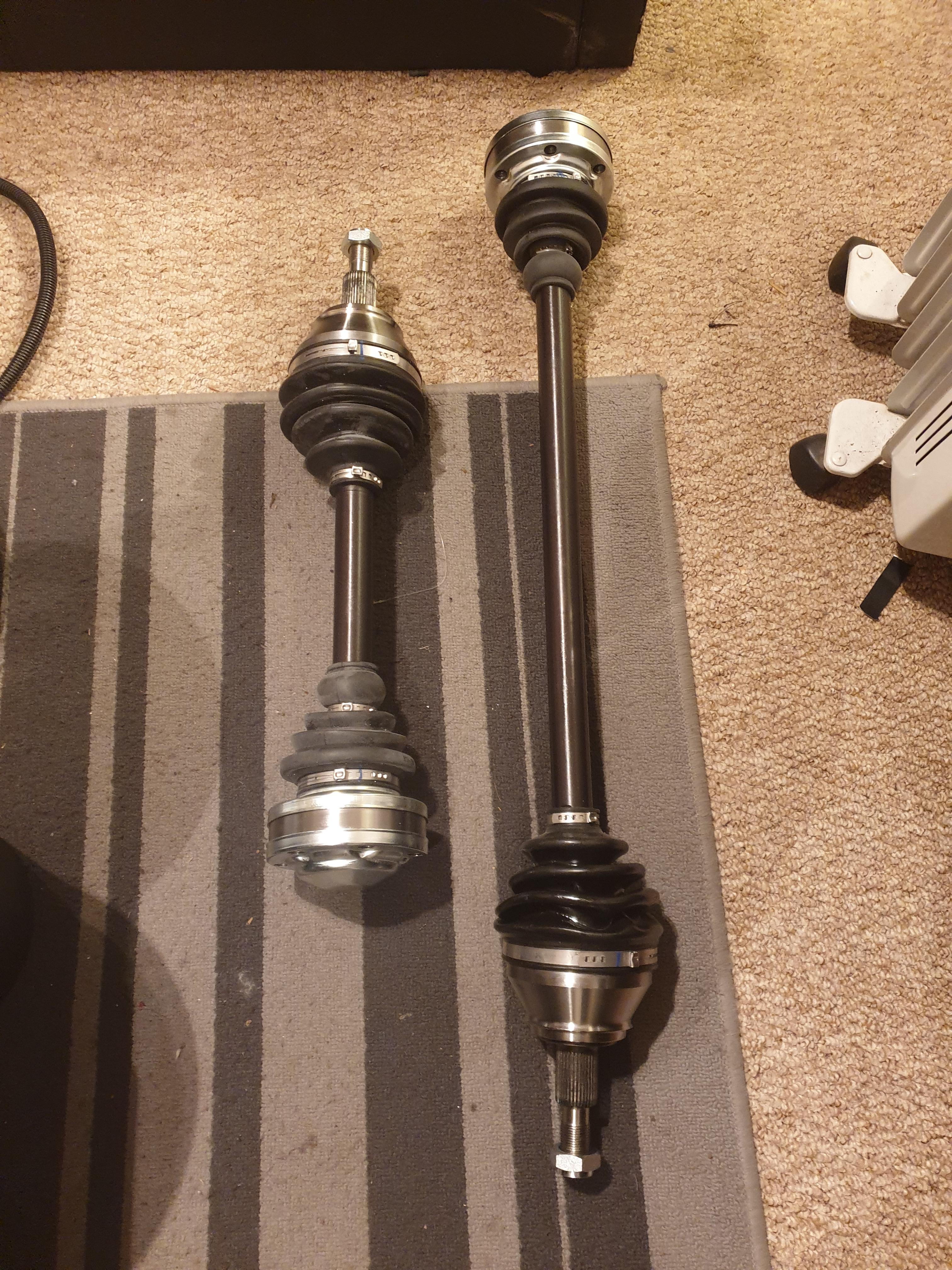 ohh and i nearly forgot about my new favourte toy

more to follow in the next few days
Top

@Hcg123 well interested to see how you get on mate. Tidy so far..

Sent from my SNE-LX1 using Tapatalk

I too am interested to see if you encounter any problems running the EDC15 ECU in the caddy, can't say I've seen that done before or heard of anyone having problems having the EDC16 ECU remapped to suit. I'm been in a few and they run fine, intact the one Matt at DubUnit in Tamworth built recently runs much better than an original BLS/BJB.
If you'd bought mk5 6 speed drive shafts you wouldn't have needed to swap the outer CVs.


I have genuine VCDS Hex V2, VagCAN Pro, KESS, K-Tag for any of your programming needs.
Top

Hi guys. Its been a busy week or so. Got the engine and gearbox in . Wish i had known about the driveshafts. What a ball ake that was!

Currently as it sits im all plumbed in. Gears linked up. Engine mounts on.

Encontered a few issues along the way. Had to buy a asz sump to mate to the 02m box and the bls one was kitting on oil pump. Bought a asz inlet and turbo inlet pipe because then i can use the map sensor on the cold side of intercooler and theres pretty much no other way of getting a inlet hose doen the back of the engine sensibly. 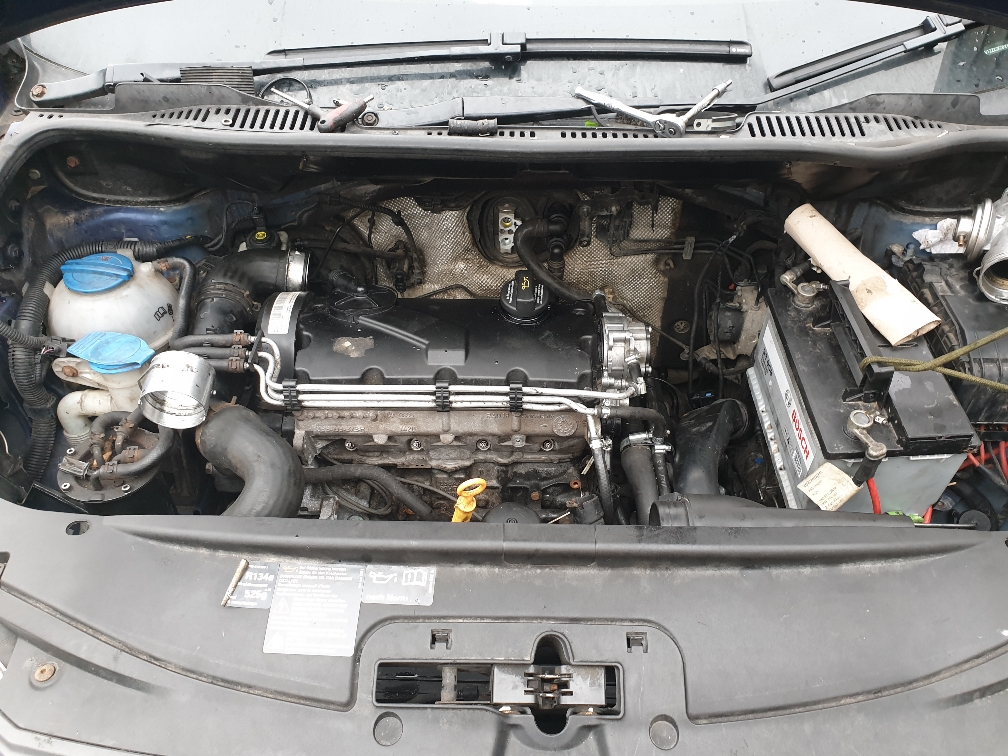 Just a heads up, fadr do solutions for the edc16 software in caddy’s with asz/arl set ups. If you can flash it, they’ll send you the file....
Top

Did redrilling the linkage make much of a difference?
Top

Its definatly shorter shift but i think it may be too short. Will need to see when its running

Not sure on short shift its definatly shorter but may be too short. Might redrill another hole.

Been doing the wiring. Heres whats been done

Went on erwin and got both diagrams for the edc15 and the edc16. Labeled every pin on back of both ecus. (This was the hardest part.

Pluged all engine side of things in to edc15 loom, encountered a few problems. Firstly glow plugs have a module on caddy so had to swap that for a relay(5 min job) secondly the rad fan controler is diferent so might bypass it and band one of those tempresure switches in my cooling lines.

Also te accelerator pedal uses a diferent style of potentometer on mk4 to mk5 ive got a mk4 pedal so will bolt that up and wire it in.

Havent turned engine on yet but in vag com only faults are rad fan, pedal and egr so no biggie there
Top

Accelorato Pedal was giving me a headake this weekend. The wires on the ecu pinout were throwing out some real weird voltages and i couldnt figure it out so i ended up bringing both pedals inside (away from the storm outside)
put the caddy pedal next to the mk4. Fed both with 5v, ground and mesured signsls. seems they operate in same potentometer fassion. But the mk4 is a manual potentometer

Went back outside and routed a new 6 core sensore cable from the pedal to the ecu. Figures out which 2 wires were the sensor wires by applying voltage and seeing if the throttle position moved on vag com.

Found a wire close enough to 5v and wired that up for power and the ground direct to chassis.

Caddy pedal now works. Doesnt return back to 0% and stays at 7% tried to do a adaptation but this didnt help.

I think if i can put a resistor in it might knock off the extra voltage heading down sensor wire. If not i can modify the drivers wish map to make it think 7% is now 0%

Either way it starts and runs now just idles hight due to throttle pedal. 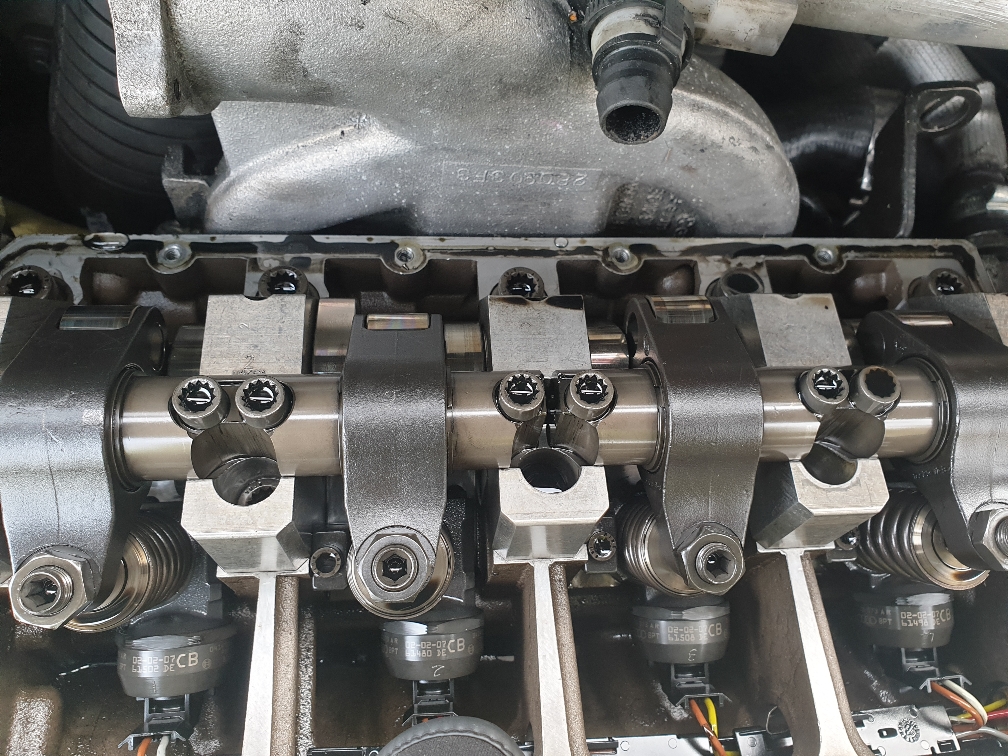 hey doc can you upgrade my account so i can see the rest of the forum please.

Have a look at the thread titled;

New Members, Please Read ALL of the first post!!!!!
Top

yeah ive done this bit yesterday, posted in it, but hasn't been upgraded to so i can see the wiring section of forum

bit stuck with these wires hence why asking
Top

make sure to read it, making a request here can delay your upgrade.. doc is a busy man, and it can take some time.
Top
Post Reply