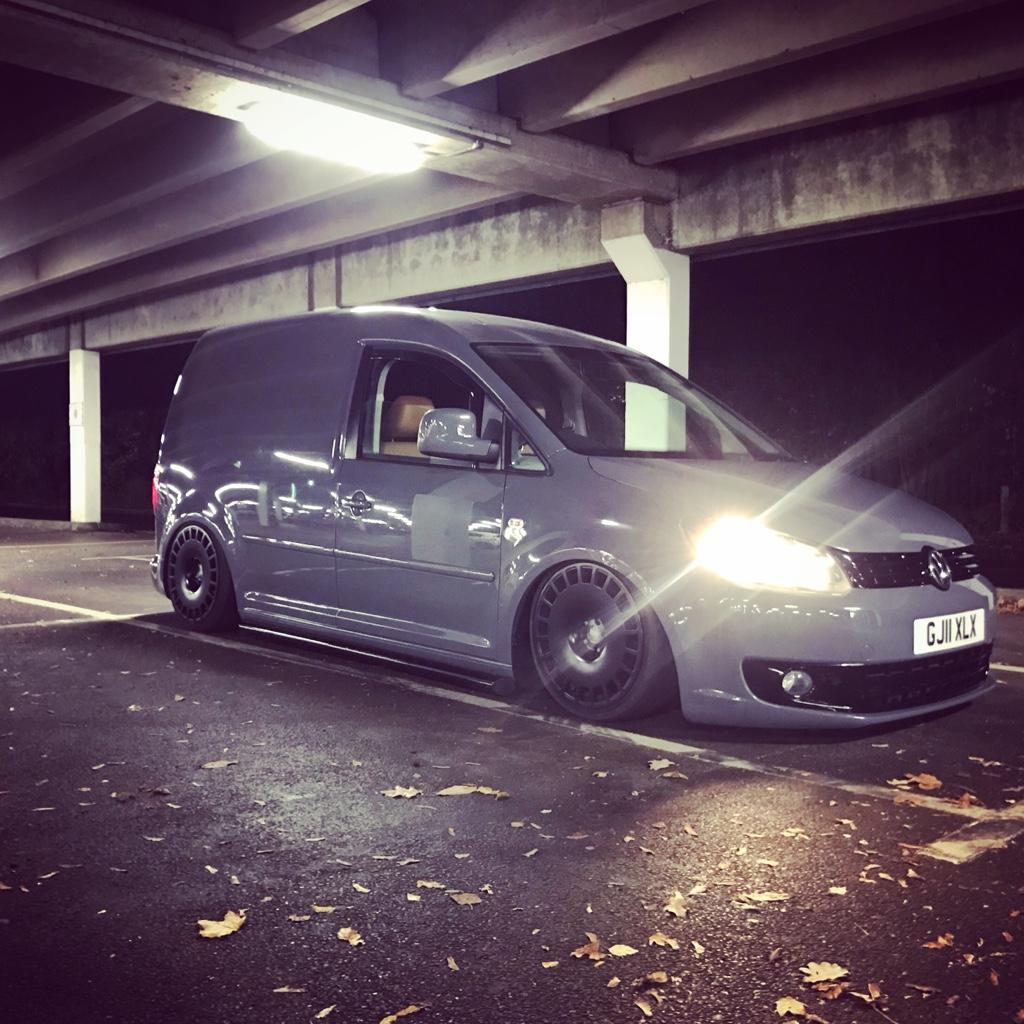 I’ve been meaning to do a build thread for a while now....well prob more like a year but here goes.

I bought the van in Nov 18 with a few mods. After having several lease vans I decided it was time for something I could have fun with.

Was planning on buying a standard caddy but this one came up and I fell in love with the colour. Also having the air already installed it would be a great head start on modding the van

So the van came with

And a few other little bits and bobs

So anyway was chuffed with my new van, as I’d not had air before I was like a kid with a new toy.

Then the problems started

, but it turned out for the best as I learnt a lot along the way and got me back into the car scene 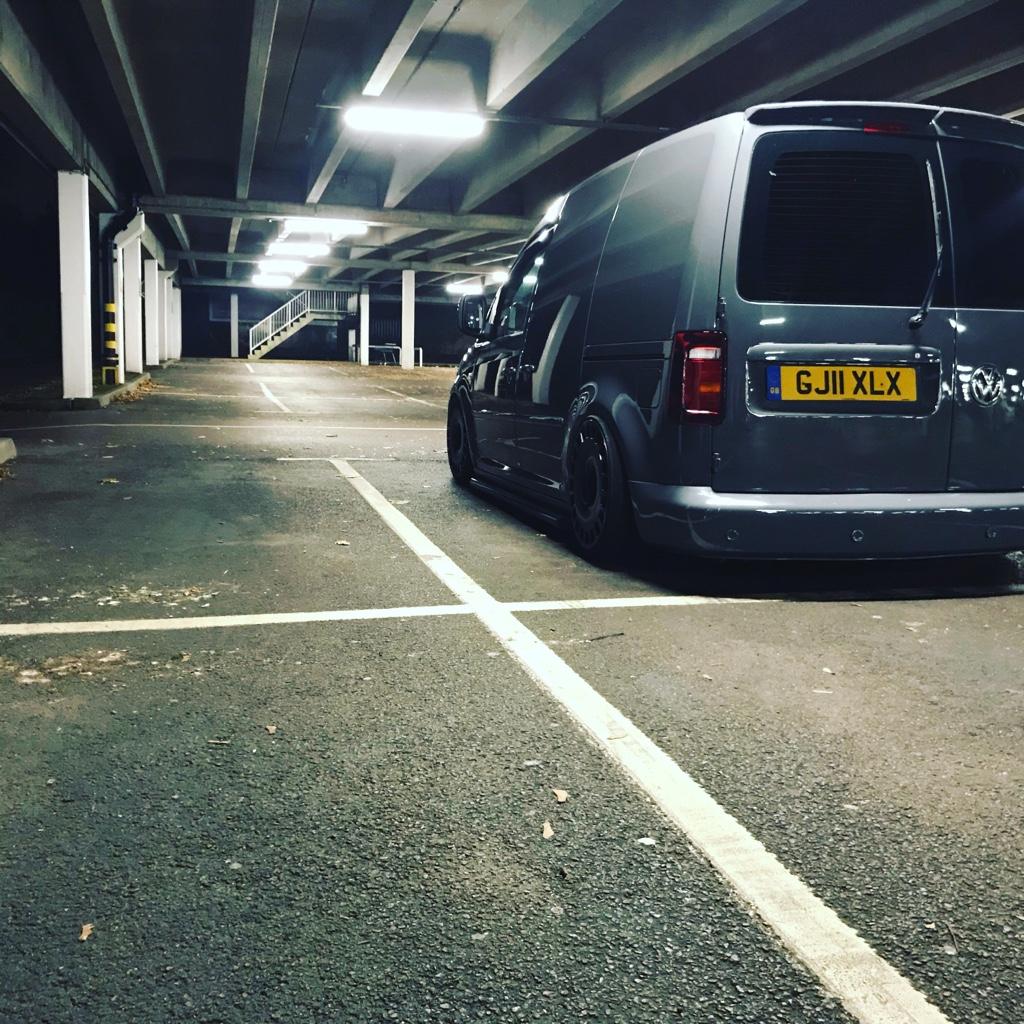 So first major problem was, most people on here can prob guess......injectors !

This is where I leant all about the VW emissions recall and good will repair scheme.

So after VW Colindale having had my van on 3 seperate occasions for a total of 6 weeks, ended up replacing 2 injectors, fuel rail, and sensors either end.

Thankfully the update had been done within 2 years, so the work was covered by VW. 2k’s worth of work!

Thought I’d dodged a bullet but it turns out the air ride system had plans for the money I had saved on the engine. 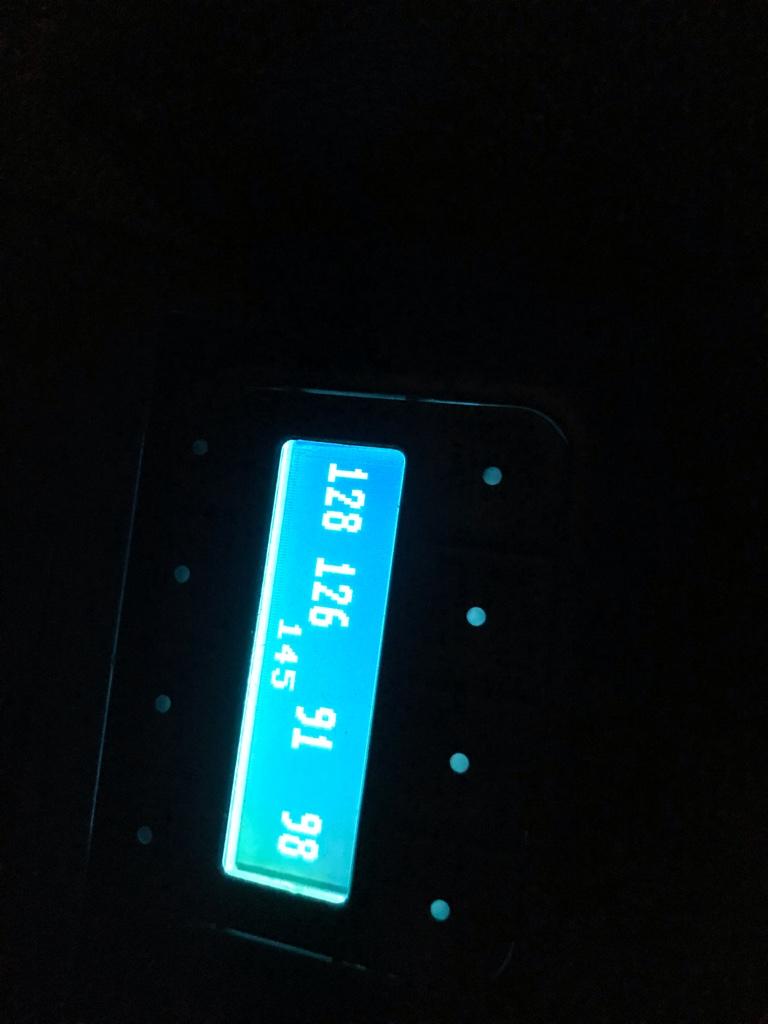 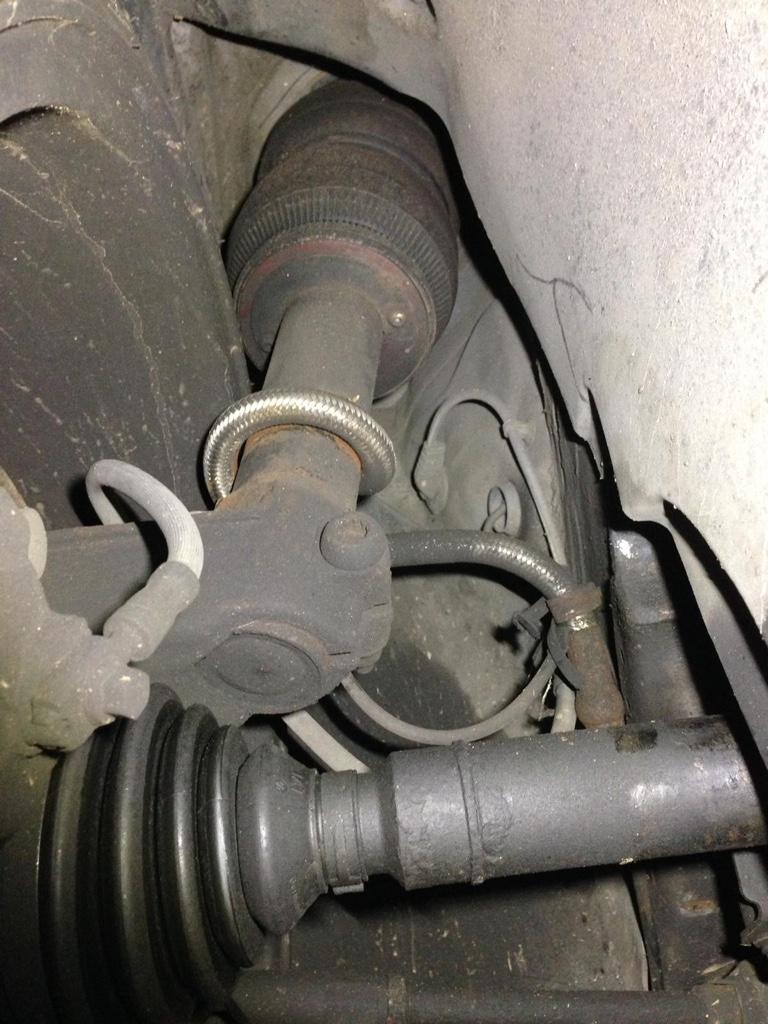 the airride appeared to work fine at first, but I think to be honest I was just naive to how it all worked.

The manifold after a few days started reading N/A on RR. So I suspected it had seen better days.

I was going to get the V2 refurbed, but after consideration I decided to go 3p. The warranty sold it for me, and being able to control it from my phone

So installed the new 3p ! All worked great for a few days then same problem but RL.
As this seemed to be a fairly common problem with a batch of 3p manifolds that had come into the country, it was replaced no fuss.

Then the 2nd one went about a week later.....this time FR ! Back to supplier, they insisted on taking it in to check themselves. I felt this was fair enough as I just wanted an answer to the problem.

no problems.....until a week later, back to supplier! This is when we found the problem below

1. Shock leaking into air bag and in turn feeding back into the manifold

2. Twisted leader hose (prob from the bag spinning at some point)


So the contaminant in the bag was back feeding into the manifold and breaking them. 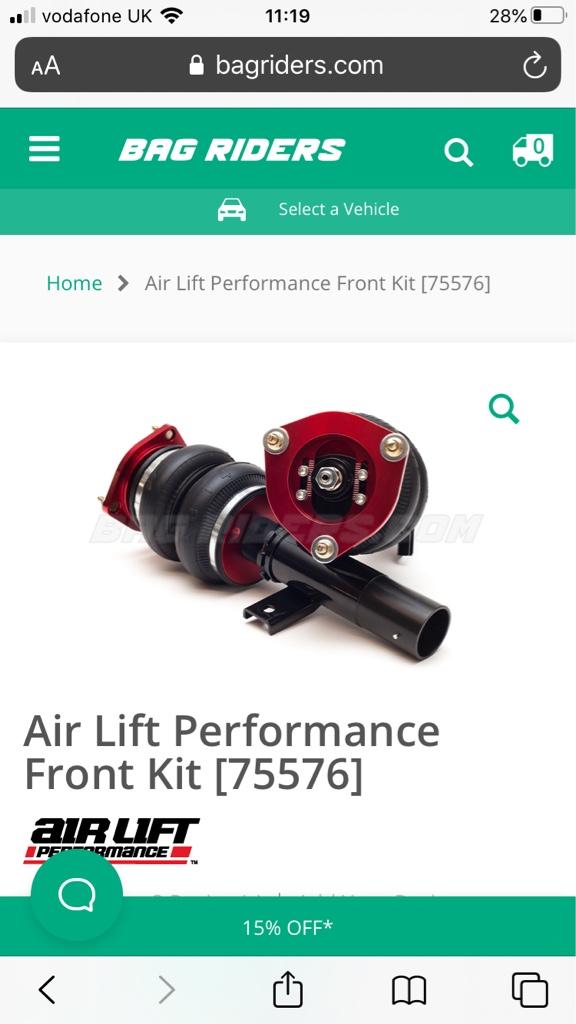 So next up was the Airlift performance front struts, not a cheap option.

I was torn between these and the ABP, although ultimately it came down to adjustability. Camber/ damping/ height on thread.

This allows me to Jack the front up on the thread in the winter and run low pressure in the bags while running a decent ride height.

Although ABP using standard top mounts is preferable, as I’ve already had to have the top mount bearings done. (5000 miles!)

This solved saga no2, just in time for saga no.3 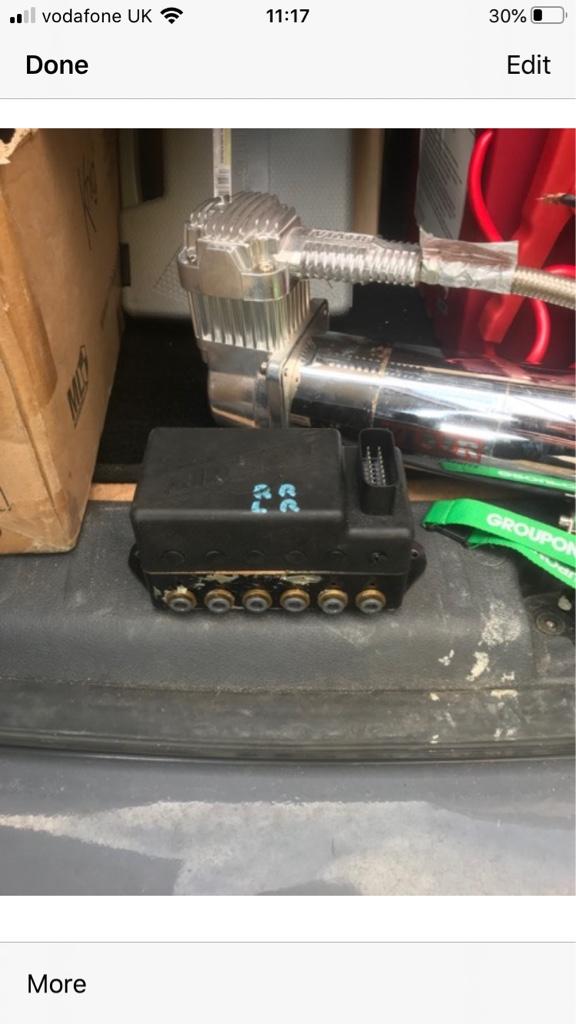 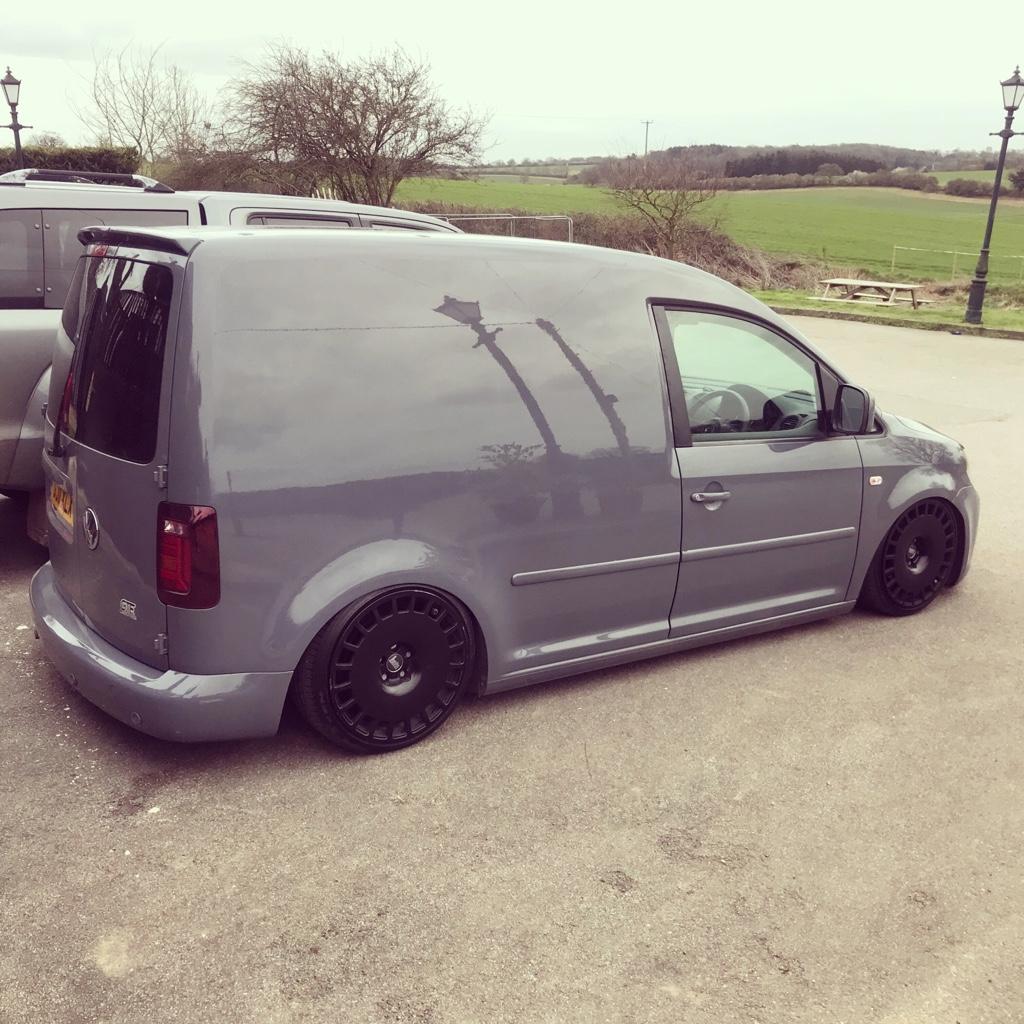 Managed to get some aesthetic work in between fixing it. Took the side bars off as they weren’t to my taste. 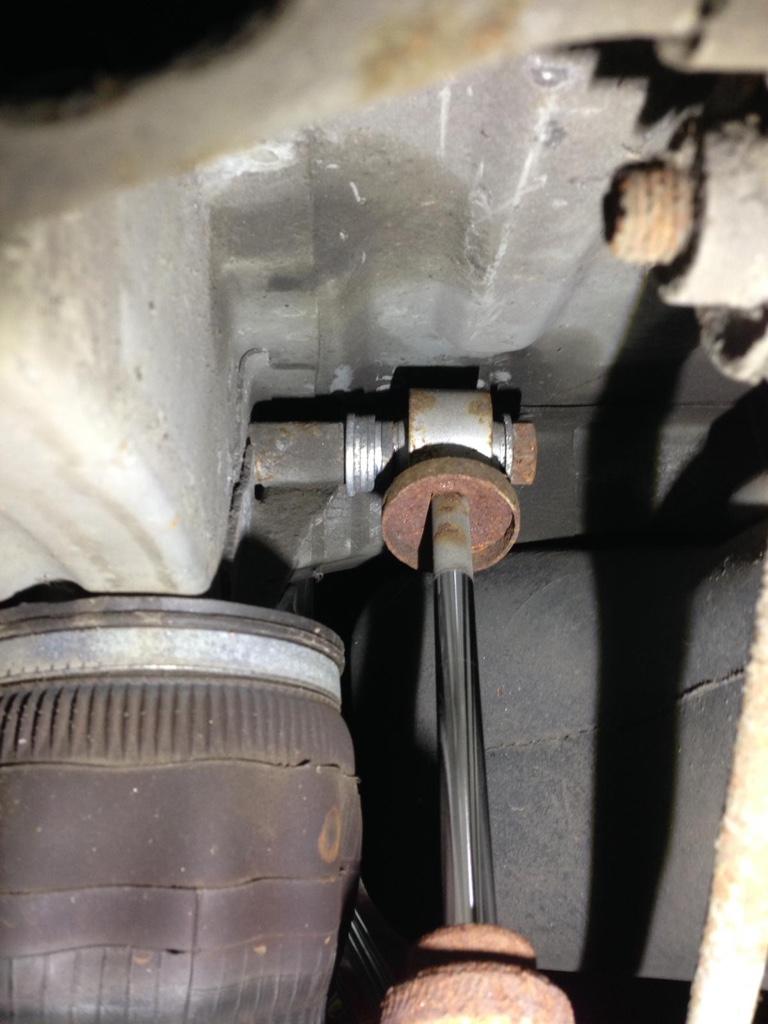 Next was to address this interesting job some muppet had carried out. As you can see slap a load of washers in and be done with it 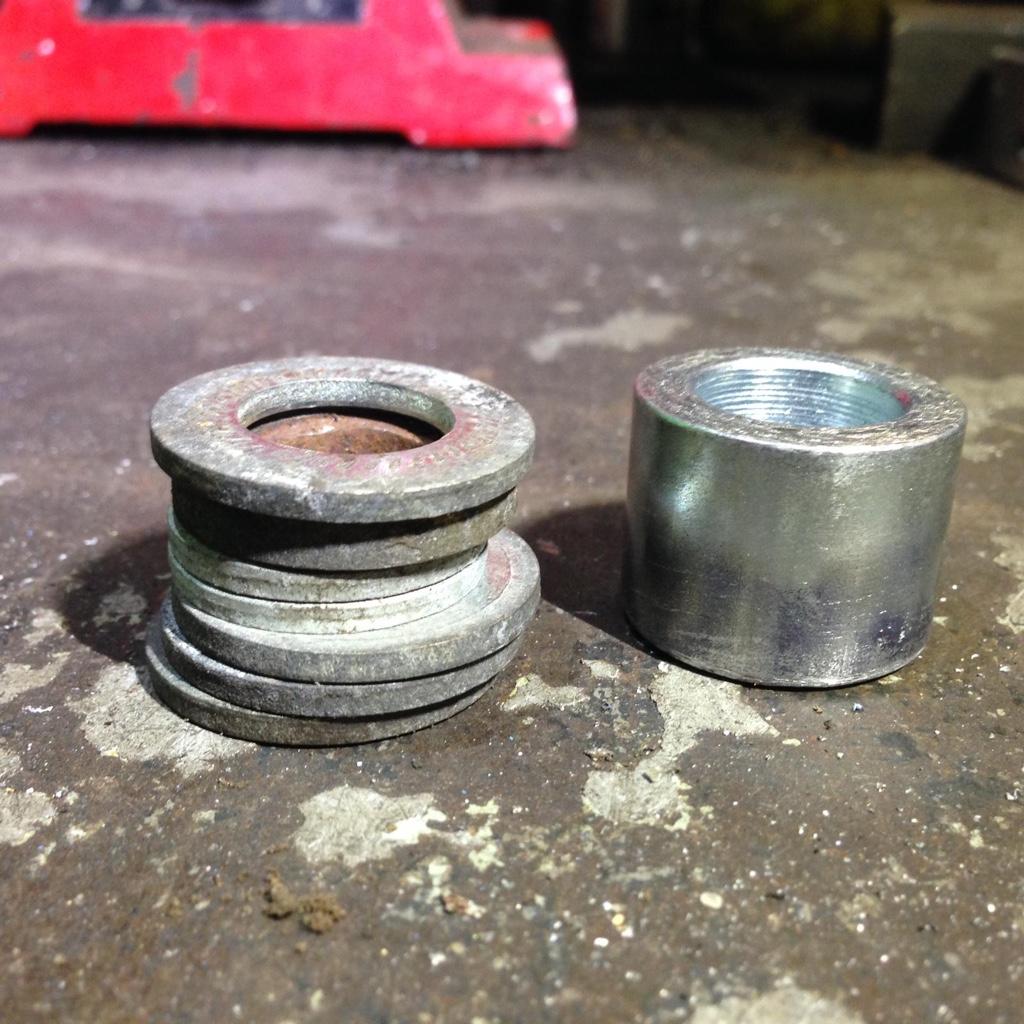 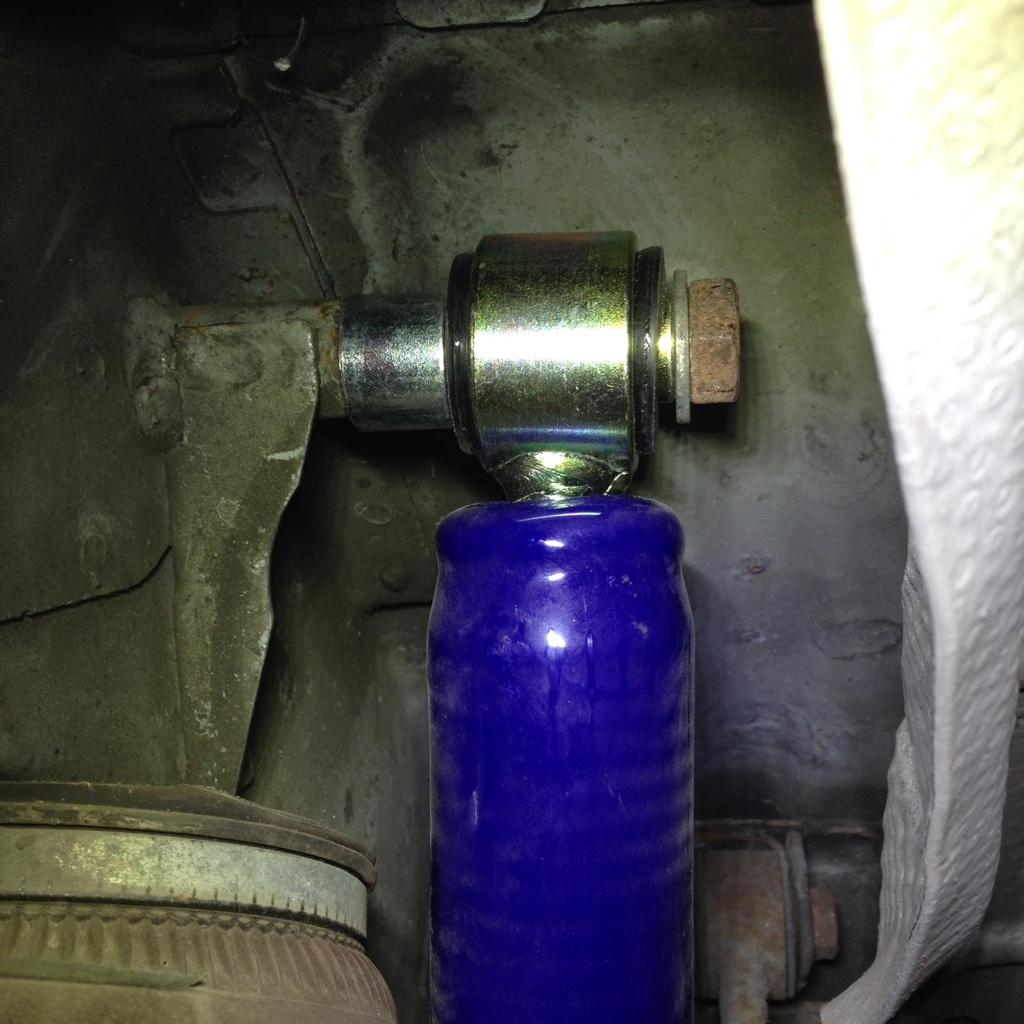 Looks killer dude! I hate side bars too! wish i could get air ! always wanted it.
Top 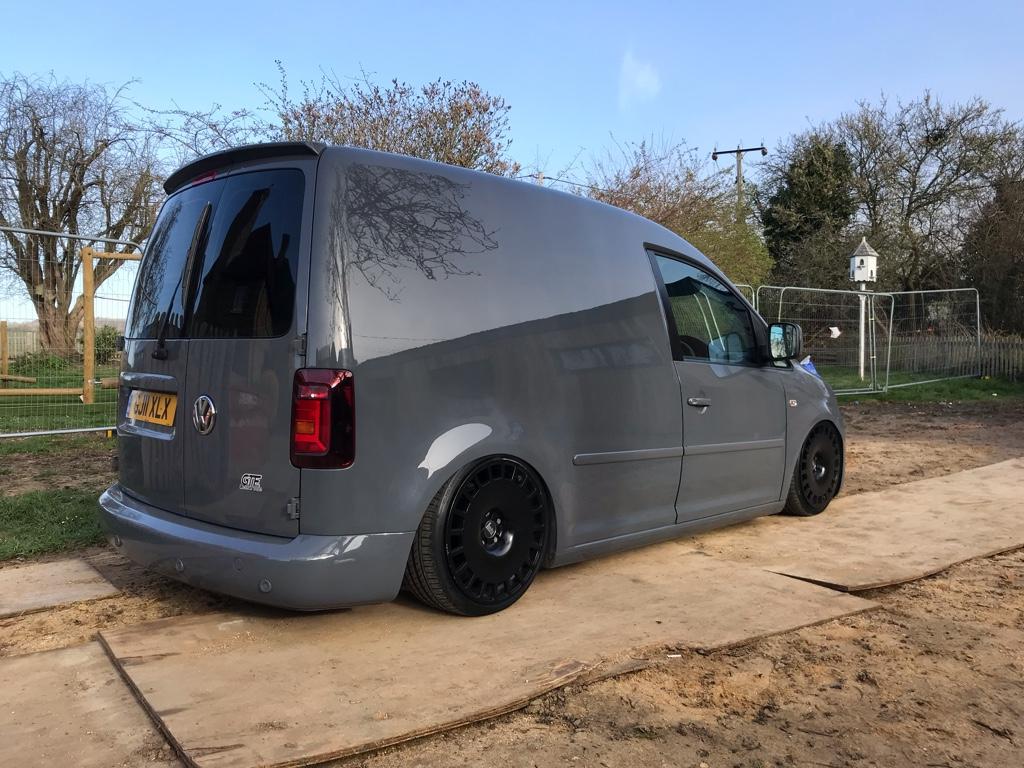 To be fair this again is my own fault for being out of touch with running a modded vehicle.

I’d always planned on getting some 19/20’s so hadn’t really paid much attention to the 18 inch Bola b12’s that came with the van.

When I look back running a van with weight in the back on 225/35/18’s was always going to cause a problem.

Anyway come MOT time I was busy at work and just booked it into the nearest place I could find. Come the day MOT tester refused to even start the test, tyres were too stretched.

At this point I was a bit shafted, I’d just bought the van spent a load of money fixing it. Now needed new wheels, or bigger tyres but then can’t air out

At this point I discovered the wheels were 9” wide and et35, they now def had to go ! 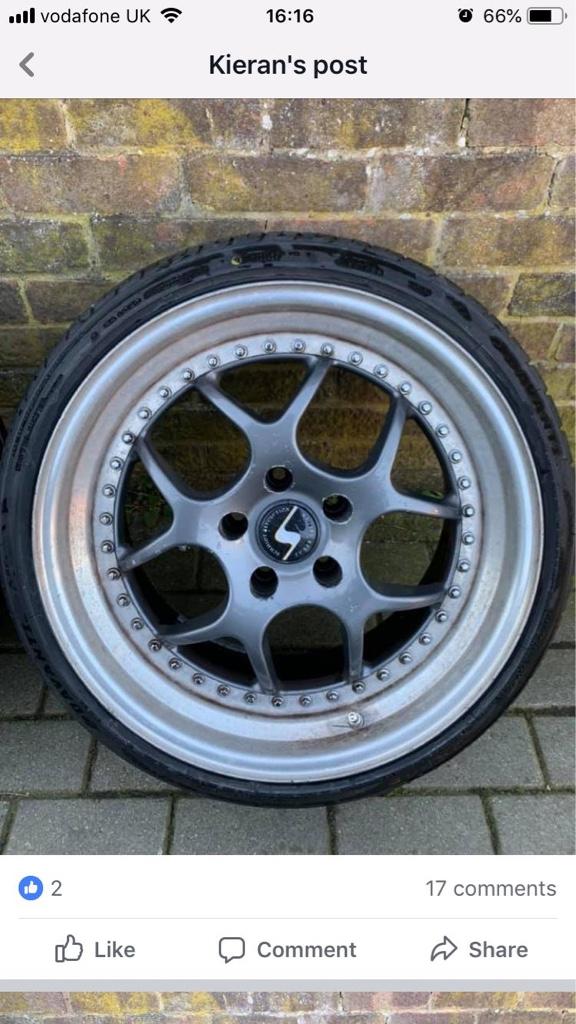 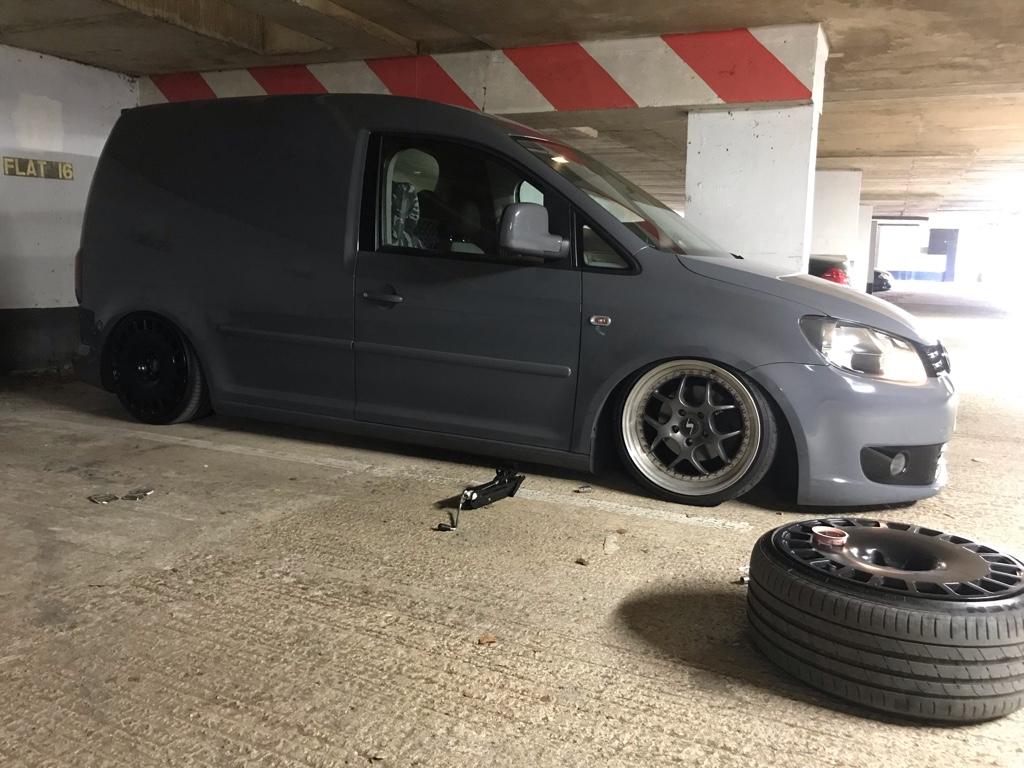 Always had a soft spot for the Schmidt VN line. The classy TSW venom

But it wasn’t to be, I spent ages with Elie at Voodoo Motorsport trying to work out how to go arch to lip.

To look right in my opinion they would have to be stepped up to at least 19” if not 20”, and the van on the ground. But without some serious chassis mods I couldn’t get it to look how I’d like.

At the time it was out of my spending limit for a van, oh how times change 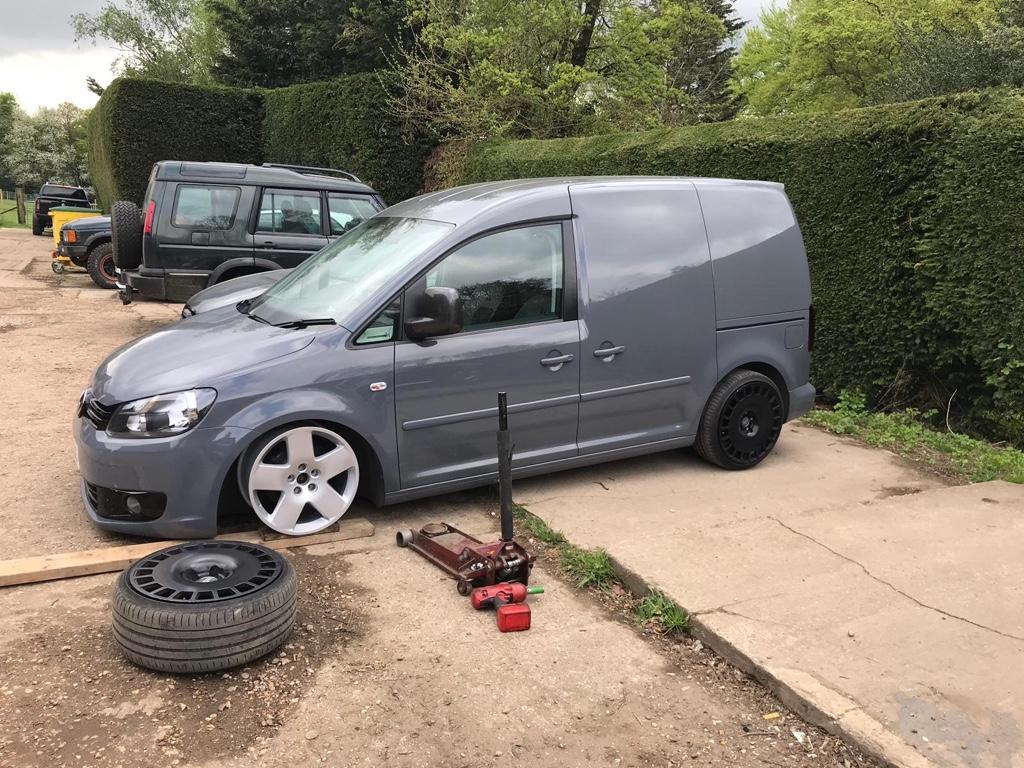 I wasn’t a huge fan and couldn’t quite make my mind up on them to be honest but I need a sensible set to get through the MOT.

I think I just missed the black

Fitted some Toyo Proxy 215/40/18, decent tyre and allowed me to get lower when aired out than on the Bolas.