I have recently joined the caddy world and plan to do some small mods, so thought I would start a build thread to document my progress no matter how small it is!

So here it is, 2007 pov spec caddy to run as a winter daily/work van in an attempt to keep my other car good (Mk7 Golf R!)
Top

Not bad condition, couple of small dents here and there, and some massive (possibly key) marks on the drivers side rear panel! 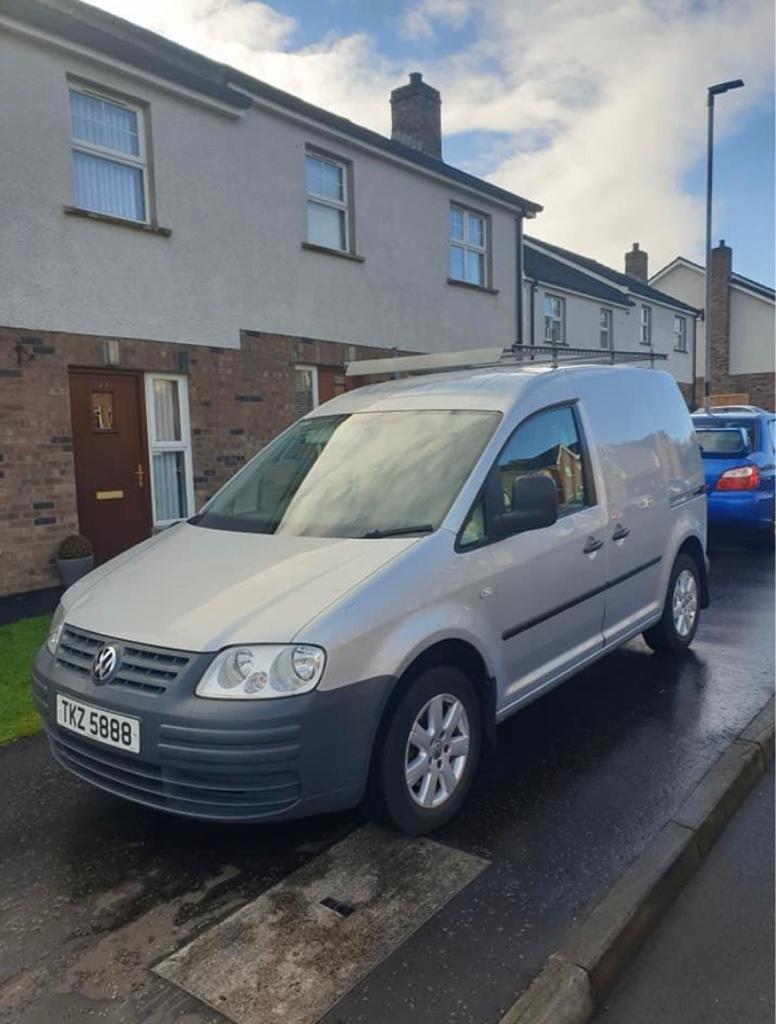 Recently changed the sliding door lower bracket/roller.
Unluckily for me the previous owner had not realised the roller had sheared off and the door was scraping on paintwork for a considerable amount of time! All sorted now for the grand sum of £8.90 on ebay

Managed to get my hands on touran seats, seat bases, centre console and ratchet armrest, front carpets and ash tray for the grand sum of £100!

Hoping to get them all fitted in the coming few weeks, just trying to make sure they are fully dry in the garage as they were lying in the scrap yard for a while!

Well chuffed with my find! 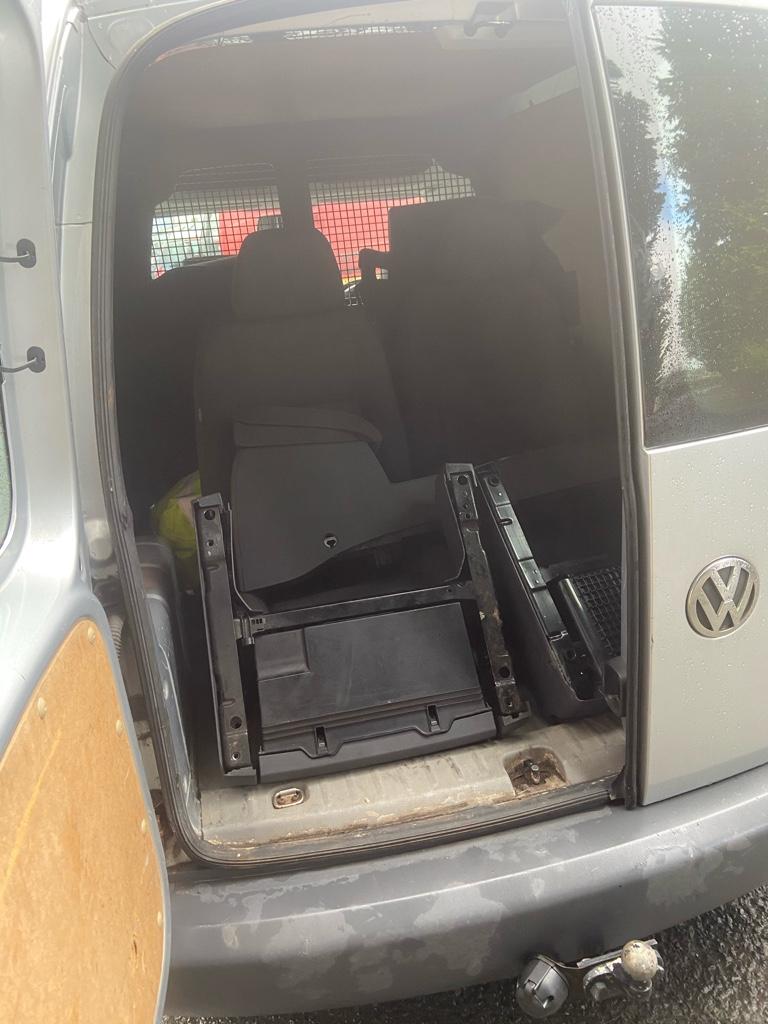 Very slow progress but I finally had a couple days off for xmas and managed to get the seats and armrest all fitted.

I personally think it has completely changed the inside of the van, much nicer place to be now! 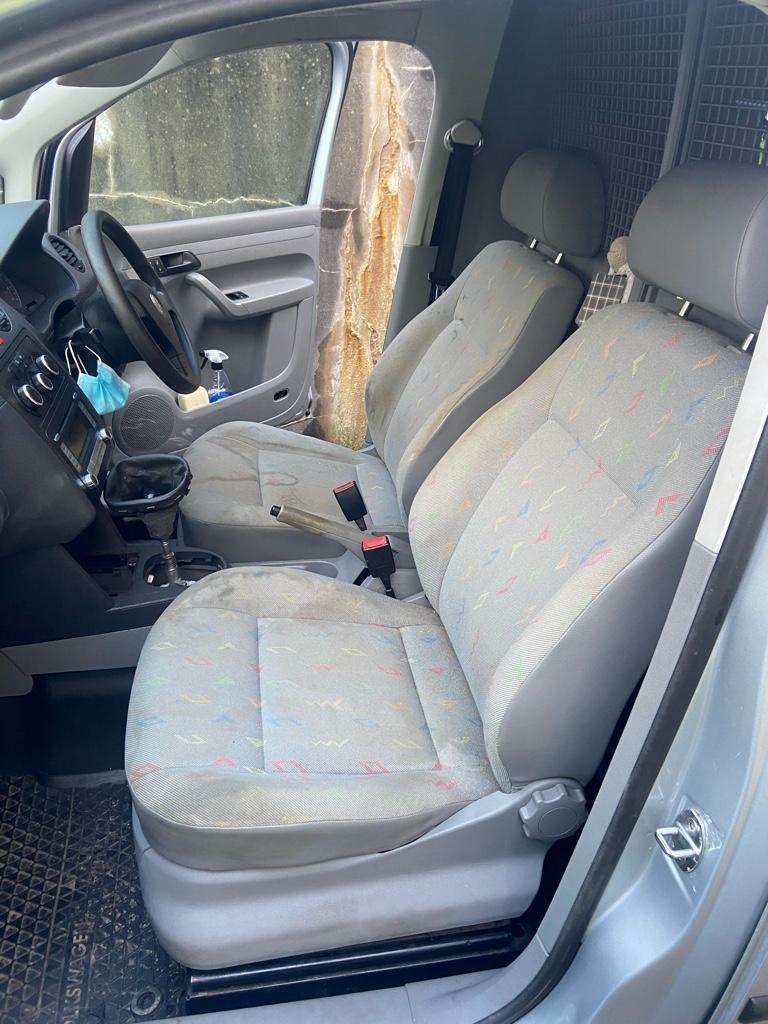 A quick before and after 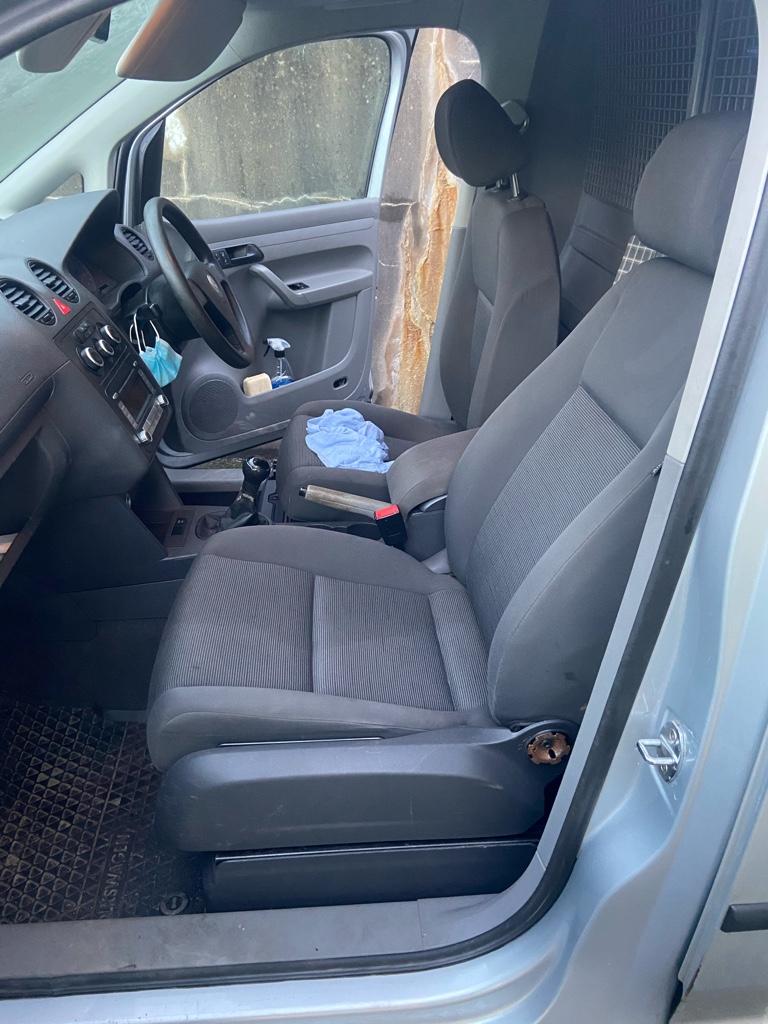 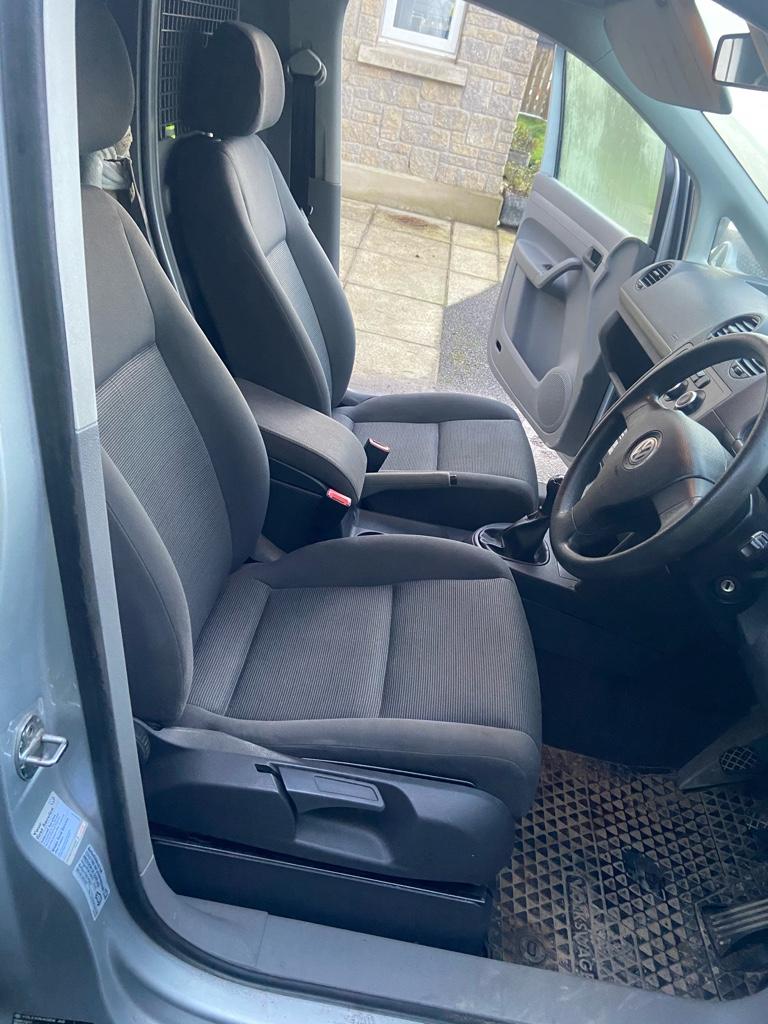 The how to guides on the forum here were invaluable as well as Lambys advice on part numbers, can’t thank everyone enough!
Top

Seats and console look great mate, did you have to cut the console down much?

Thanks! No just a small rectangle at the rear of the console and the middle section from around the gear stick.

Slow progress as expected on this daily work van build.

Rubber floor temporarily laid in the rear. The rear will be sound deadened, insulated and carpeted in the future so I haven’t stuck it down.

4 new tyres fitted to get through MOT and she flew through - being in Northern Ireland all of the MOT’s have been postponed/cancelled so I was lucky to get one.

While collecting the door about an hour and 45 mins away I spotted a set of 17” Mk3 FR leon alloys on gumtree, went and collected these on the way home as well.
Seen these on Mouse’s build and thought they looked great. A nice touch to the van while still being forgiving for a work van. These could do with a refurb tbh but that is close to the bottom of my list right now. 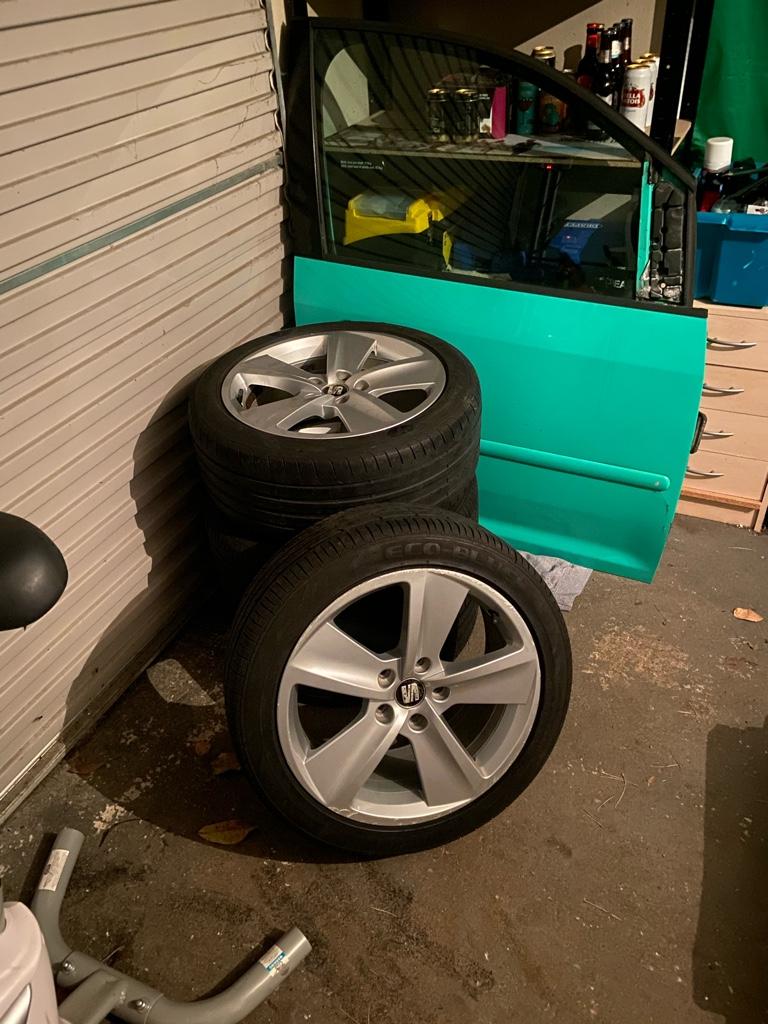 Roof Rack blanking bolts and De Wiper bung ordered and delivered so will hopefully get round to fitting these at the weekend. Thanks to Doc for the heads up on an arcade button blank, much cheaper than any other option, so I ordered 2 just encase. 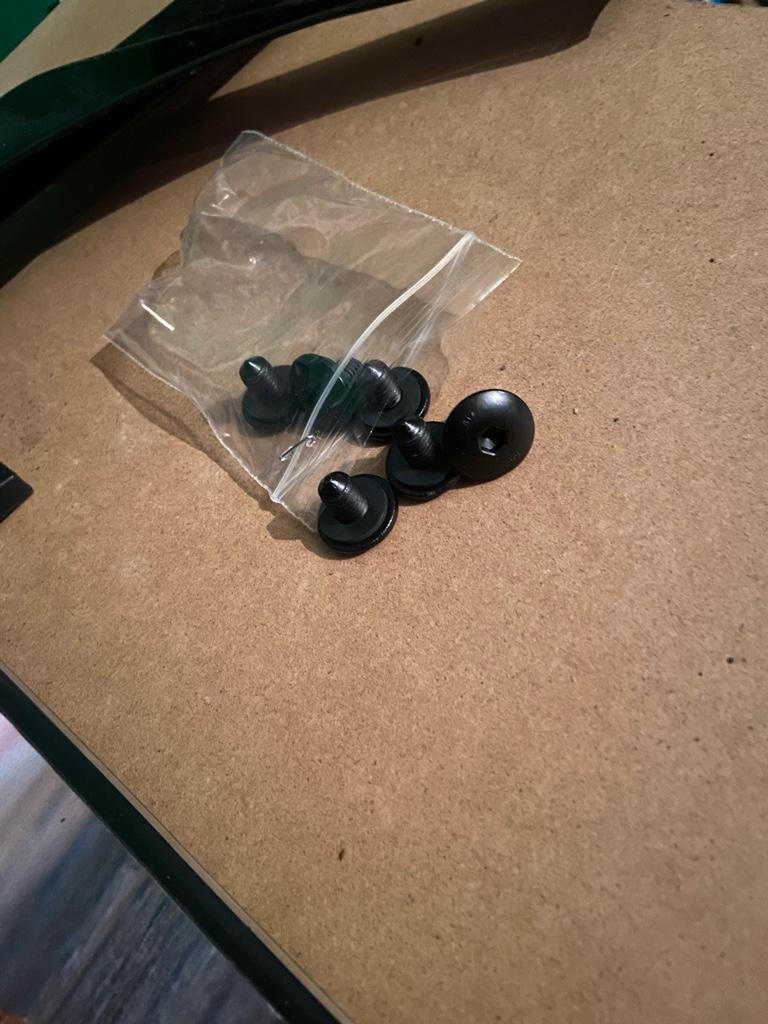 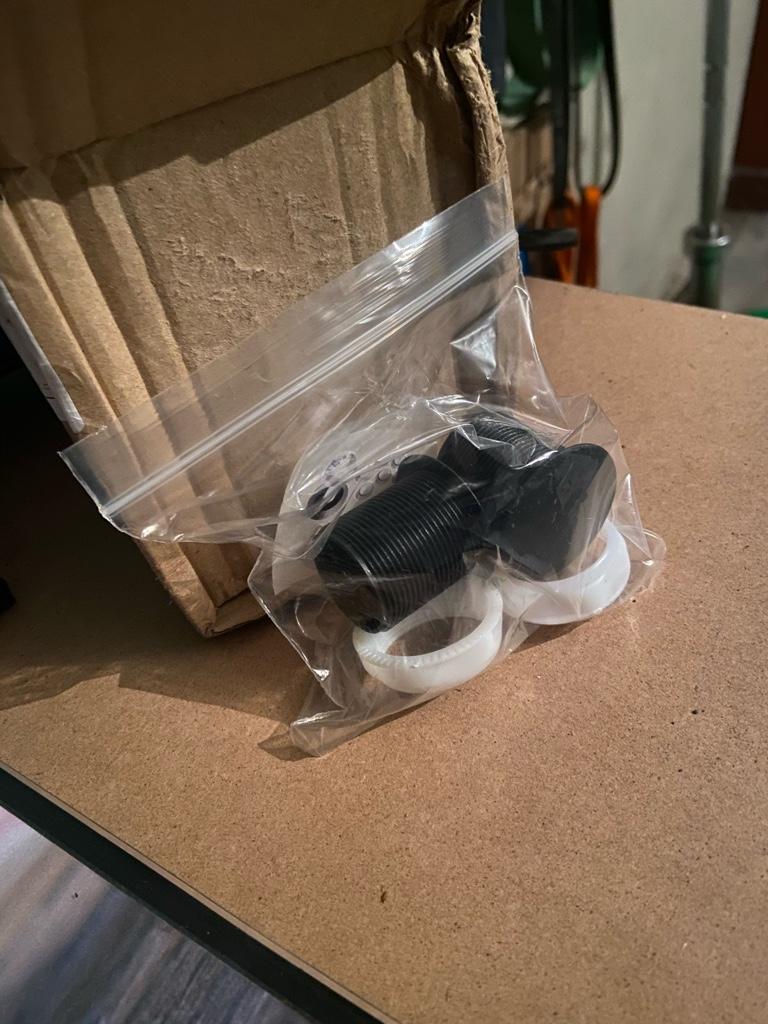 Next on the list is tinting the back windows for security and to get the door colour coded and fitted, potentially along with the handles / wing mirrors. Then some sort of suspension drop to sort the arch gap out.

What year touran seats did you use & did the bolt straight in ??

Looking to change the seats on mine , but want a simple solution , if that’s possible .

As far as I can remember they were from an ‘04 touran, much newer could potentially work but this was close to me and cheap so I went with them.

The seats make a massive difference I would definitely recommend the upgrade.
Top

Also yes they bolted straight into the caddy and I used all the bolts removed from the touran.

@Gibson9
Thanks for the reply .

It’s an upgrade I definitely need to make as I think the standard seats are a bit uncomfortable .
Last edited by Giddy on Wed Feb 17, 2021 5:35 pm, edited 1 time in total.
Reason: Removed unnecessary quote of previous post
Top

Had some free time this morning so managed to de wiper the barn door and remove the roof rack. 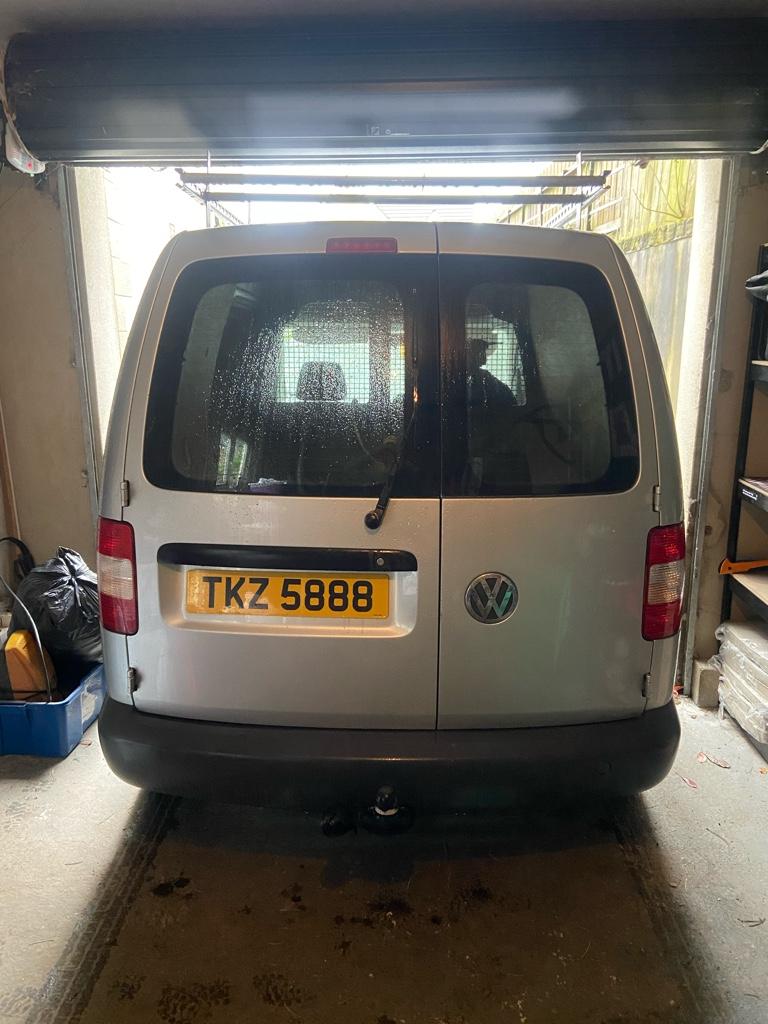 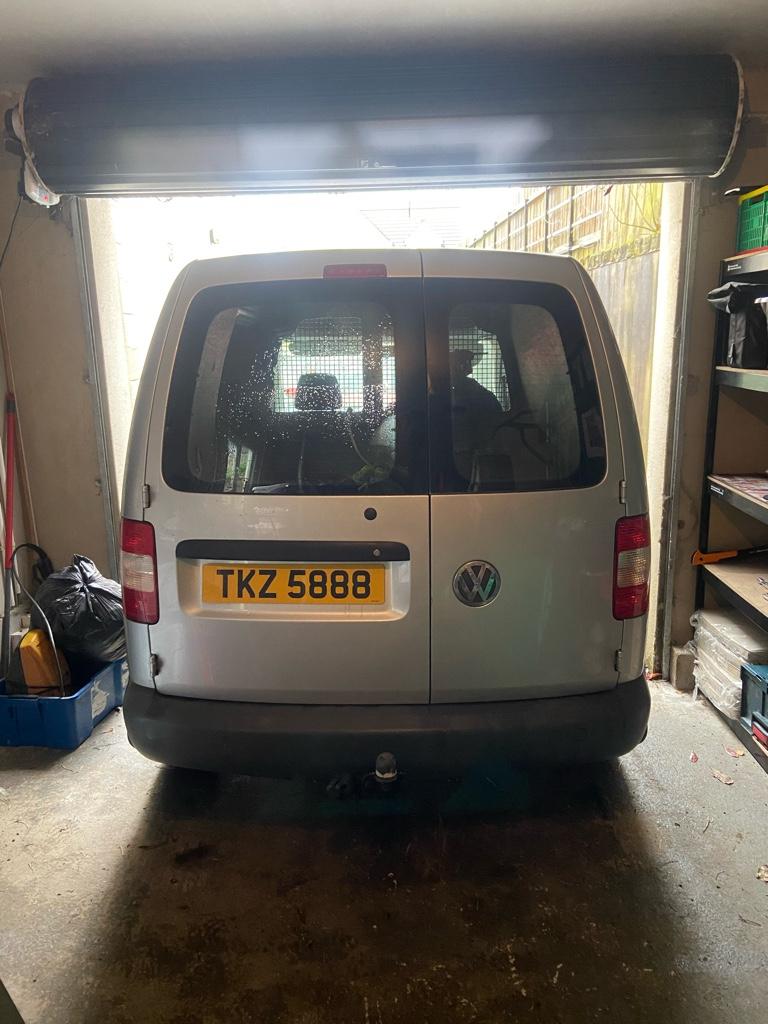 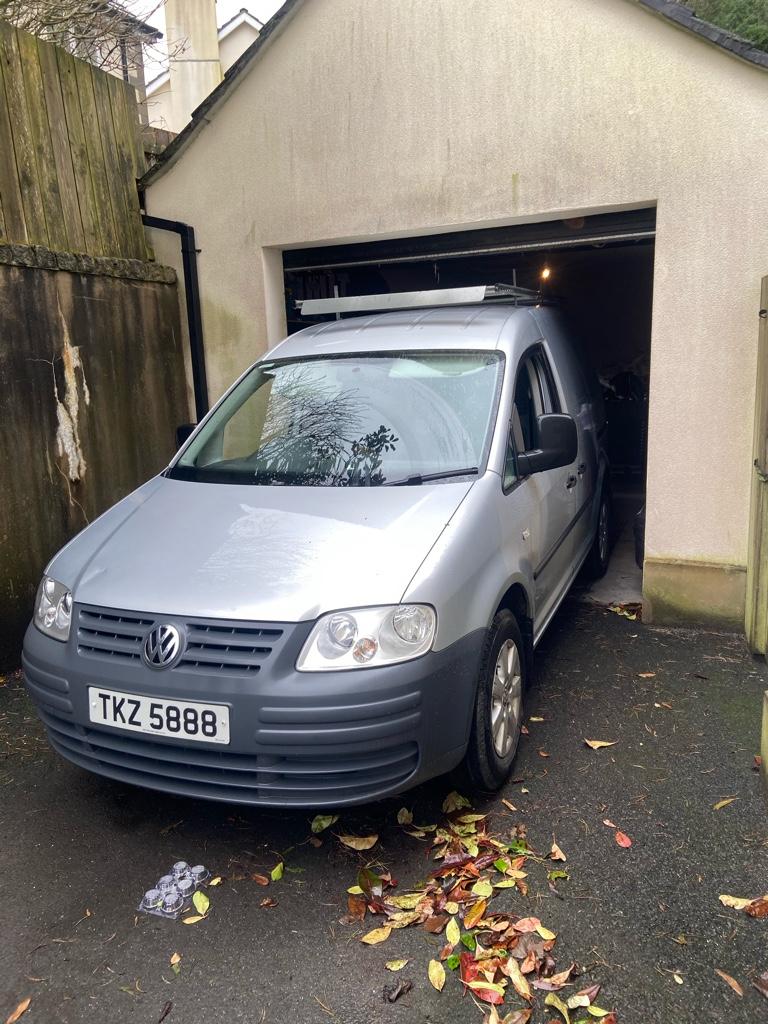 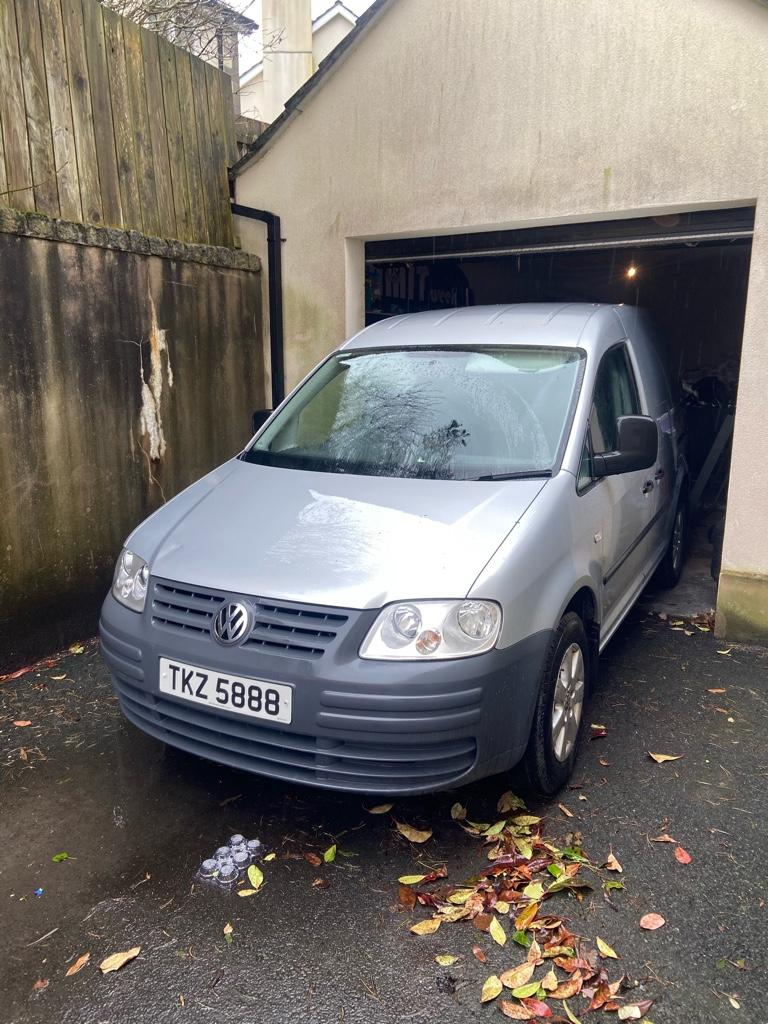 Quick change of the worn out gear knob 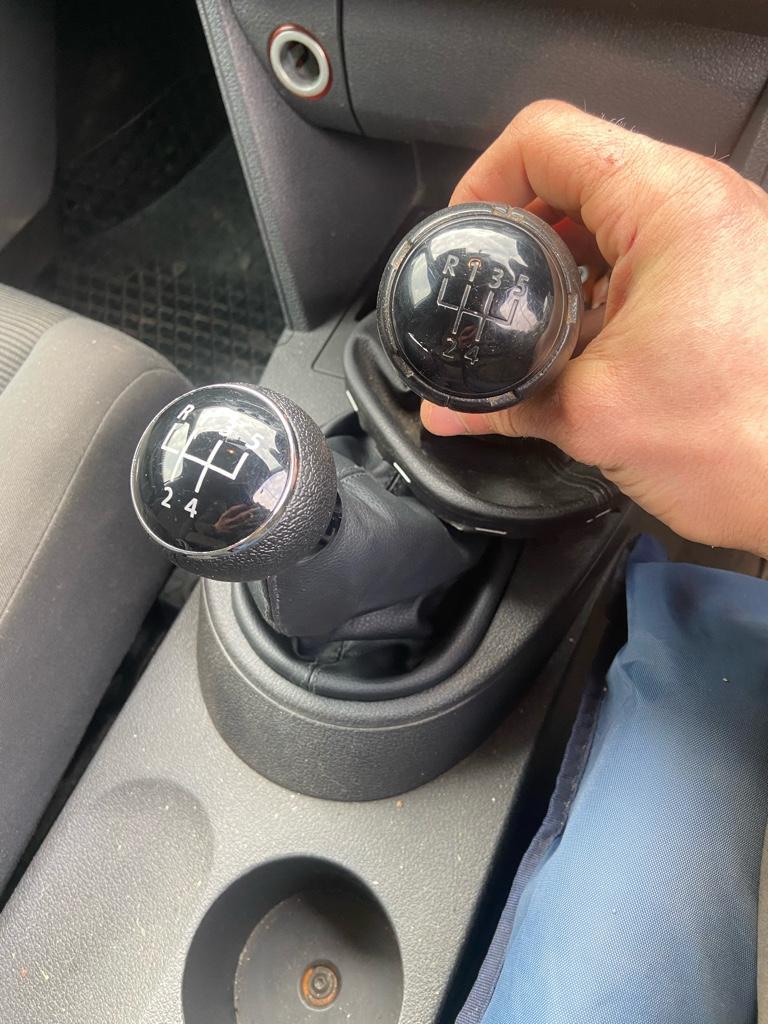 Despite the van being in desperate need of a clean, I managed to fit my ebay special ‘GTI’ pedals 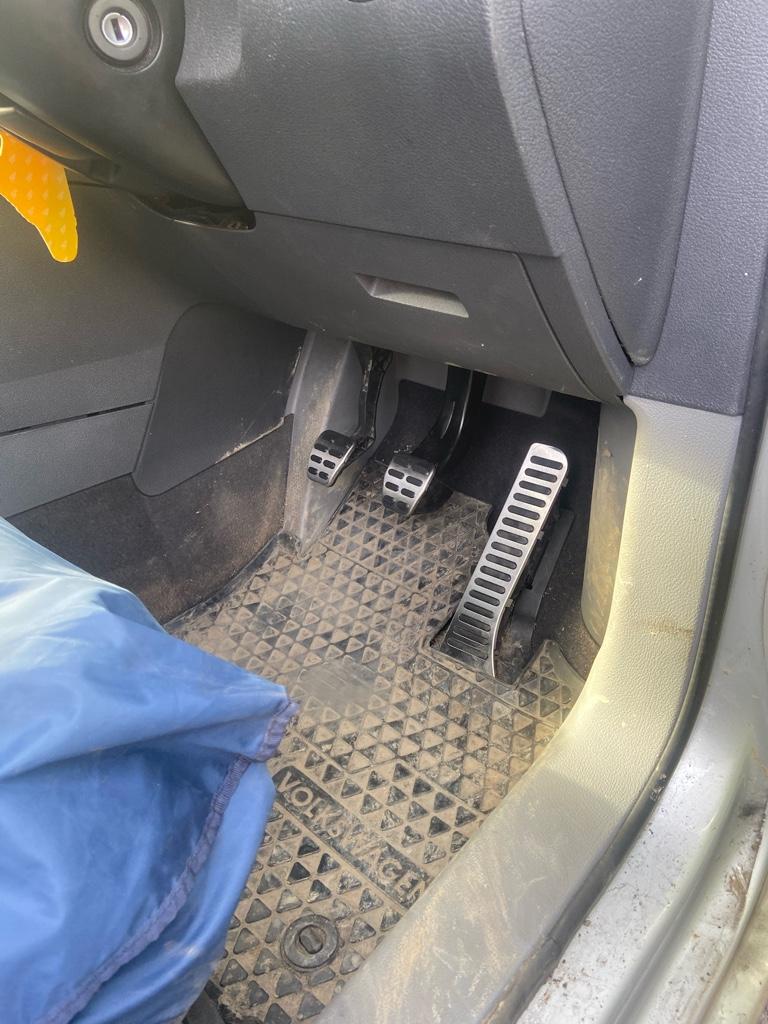 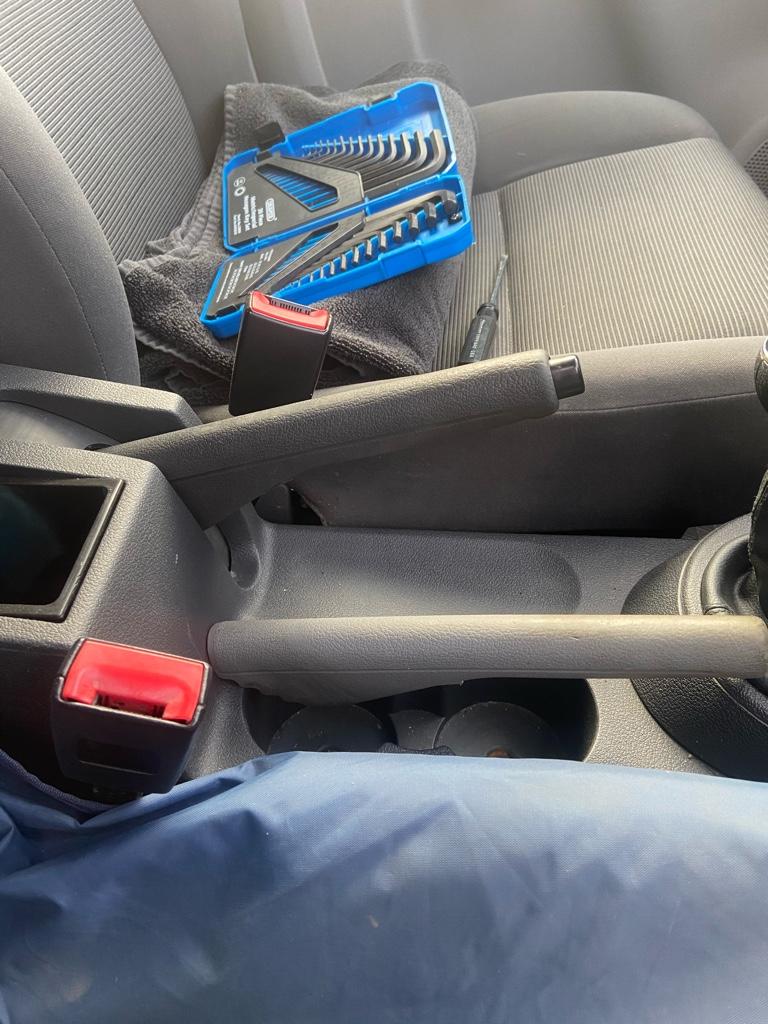