Well, after owning a T5 project for 7 years, it was sold at the end of last year to purchase a T2 Brazilian Bay which is fun but is certainly no transporter, I then picked up a clean Golf 5 FSIs which was lowered with Stance+ coilies, which I haven’t really gelled with, so it’s up for sale to make way for a Caddy. 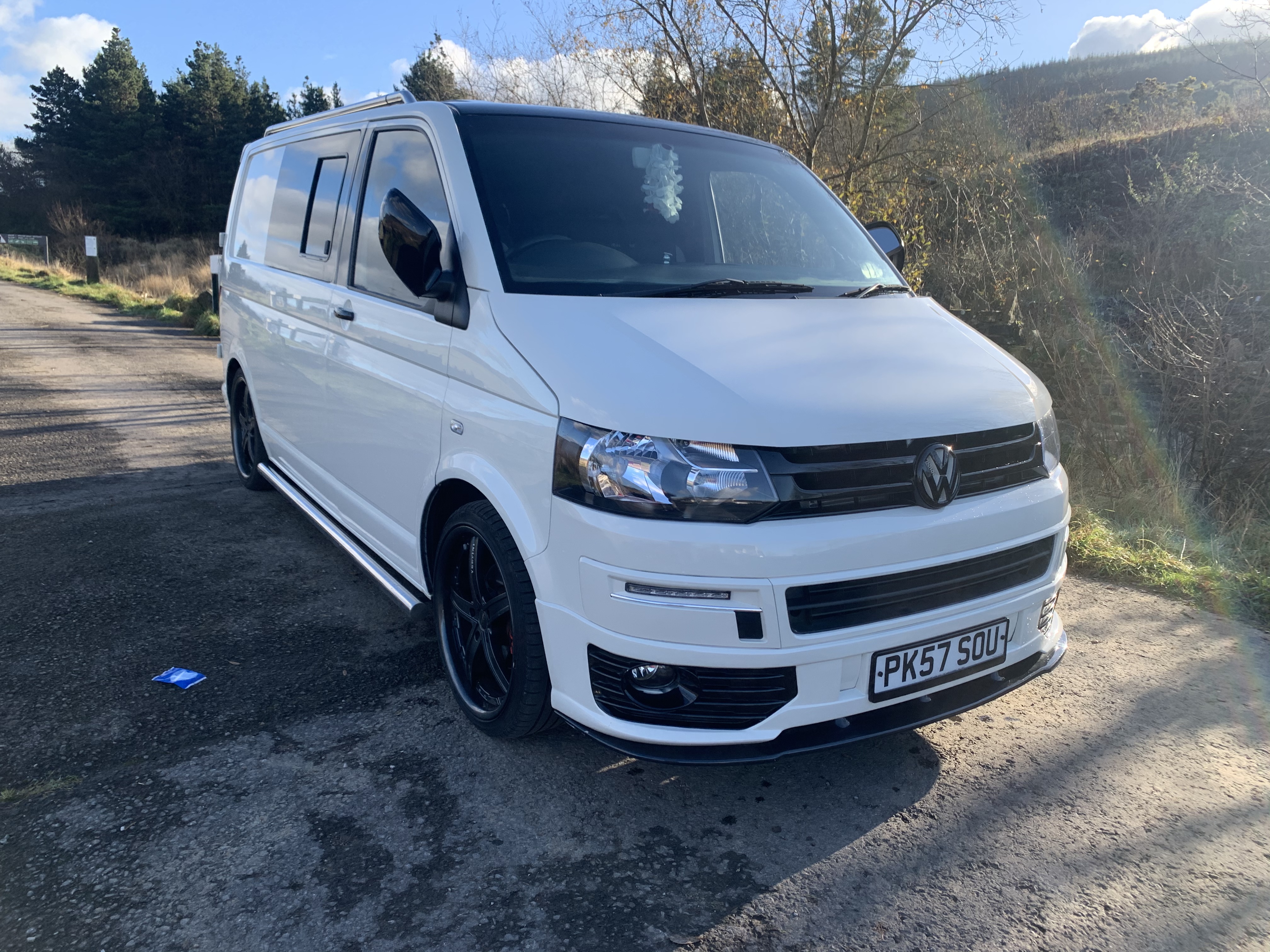 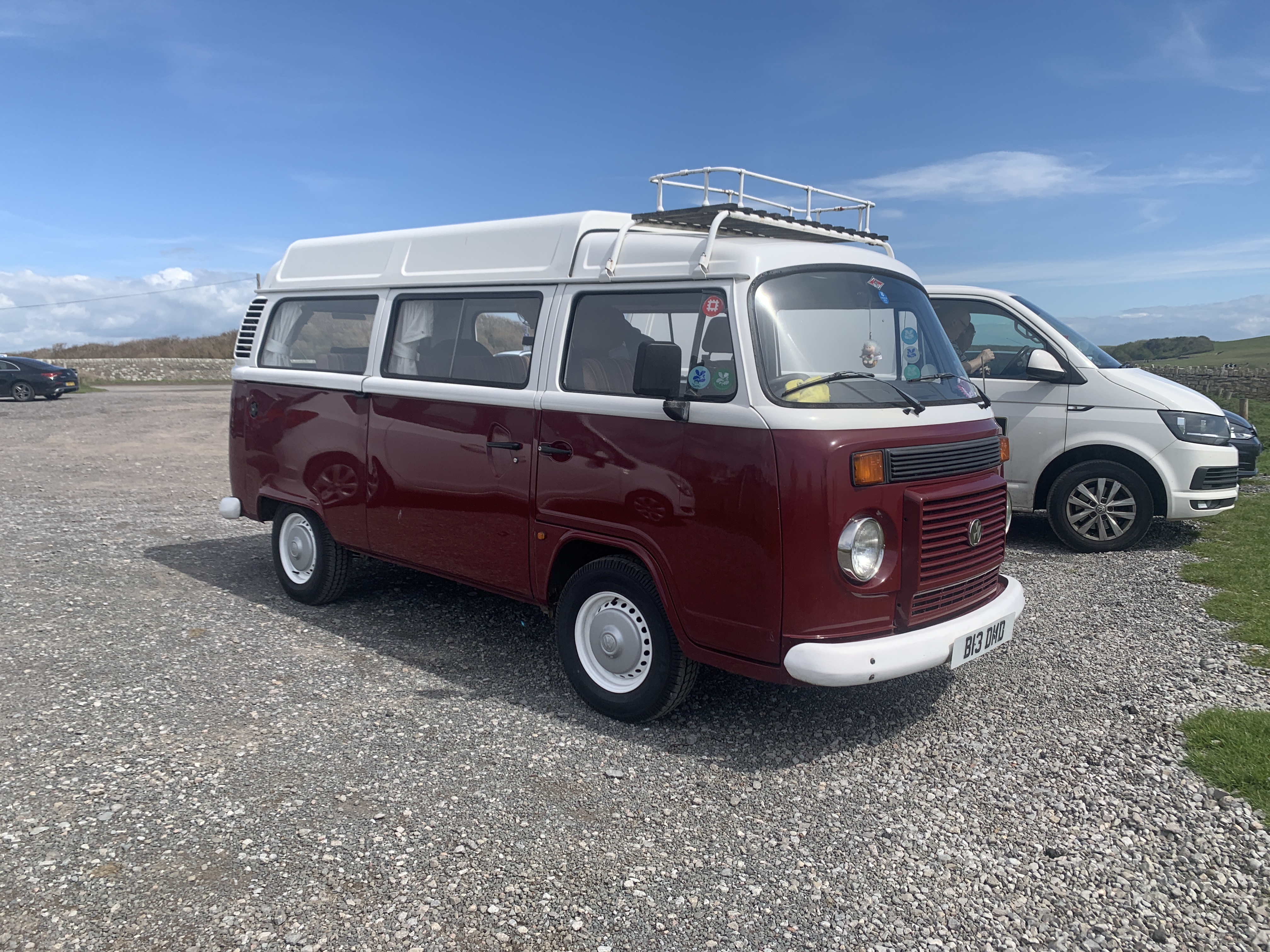 So looking on Gumtree I found an advert for a Caddy 25 miles away advertised as lot of money spent but spares or repair. Rang the owner who confirmed there was a problem that even after replacing items would not cure the van. It had had a new crank sensor, new injector loom, and still throwing faults and going into limp mode. I viewed the van and even though it looked like it had ram raided a Lexus showroom in downtown Japan I decided it was worth it and agreed to purchase for £1000, he was shocked that I never tried to knock him down, but the truth was it was worth the asking price even if it needed an engine! 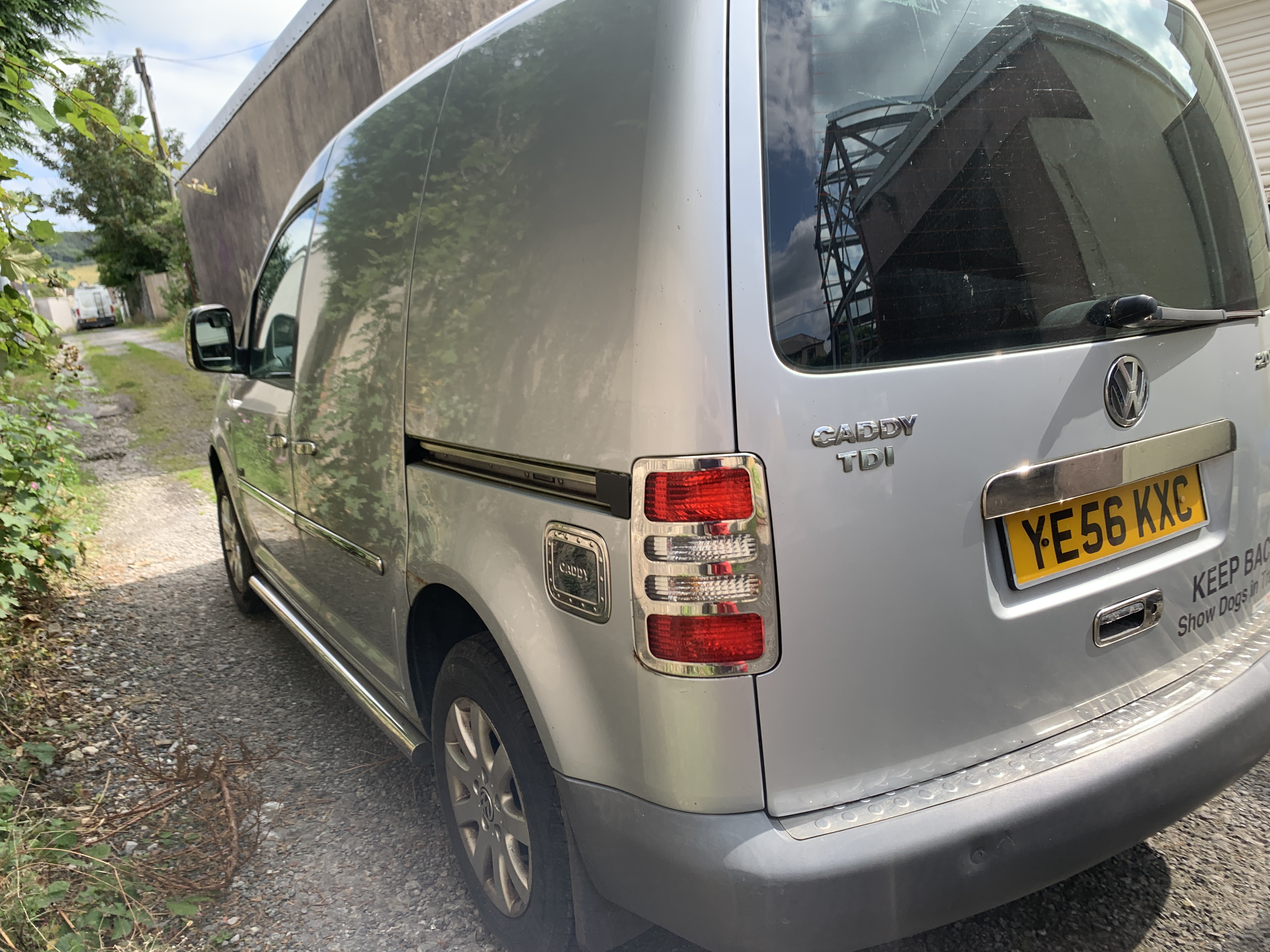 So, the owner let me visit the day after viewing, with my tools to see if I could resolve the issue to save the cost of a recovery home.

YouTube vids suggested a wiring issue in the engine harness, so equipped with a gas soldering iron, a handful of tools, insulated shrink tubing, self amalgamating tape and some light gauge wire, I headed for Cross Hands near Swansea with my old man along for the ride.
Within twenty minutes of arriving and removing the airbox and corrugated cable trunking/conduit behind the radiator, it was obvious that this was probably the issue. Also confirming the earth point between the battery and the cam sensor plug with the multimeter set to continuity, I could then confirm loss of the five volts feed but also presence of five volts reference at the cam sensor, confirming that there was indeed a break in the wire.

In total I found four broken wires which had maybe five witness marks per cable, indicating rubbing between the loom and trunking and four breaks. An hour or two later after cutting out and repairing the wires, codes were cleared and the van started with no further issues.

The PO joked, you’ll be driving this home now…..to which my dad replied, “I can drive the golf if you’d like”.
Ten minutes on the phone with my insurer got a days cover and my dad on my insurance and off we went!
Top

First task once it was home was to get rid of the 15” standard Caddy Sport alloys to be replaced by my recently powder coated Eos/Passat Solitudes, and undress it to get rid of the stainless tat!
There must have been £350 worth of stainless attached! Both items quickly listed on Gumtree for £150 and £60 respectively, which means I could be into this van before the spending starts for around £800 plus my alloys. That’s a result! 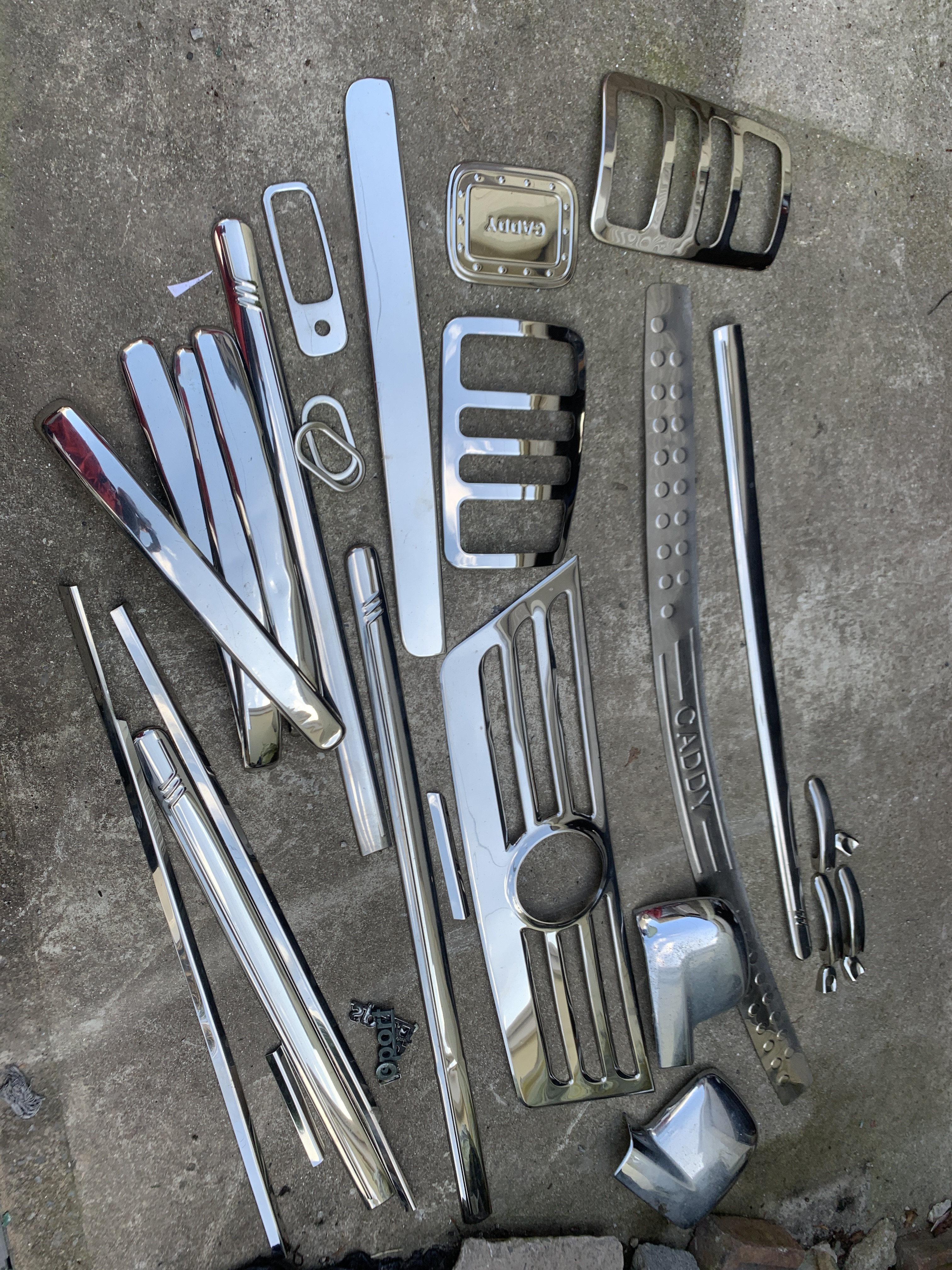 ….and now somewhat naked the van looks much nicer! 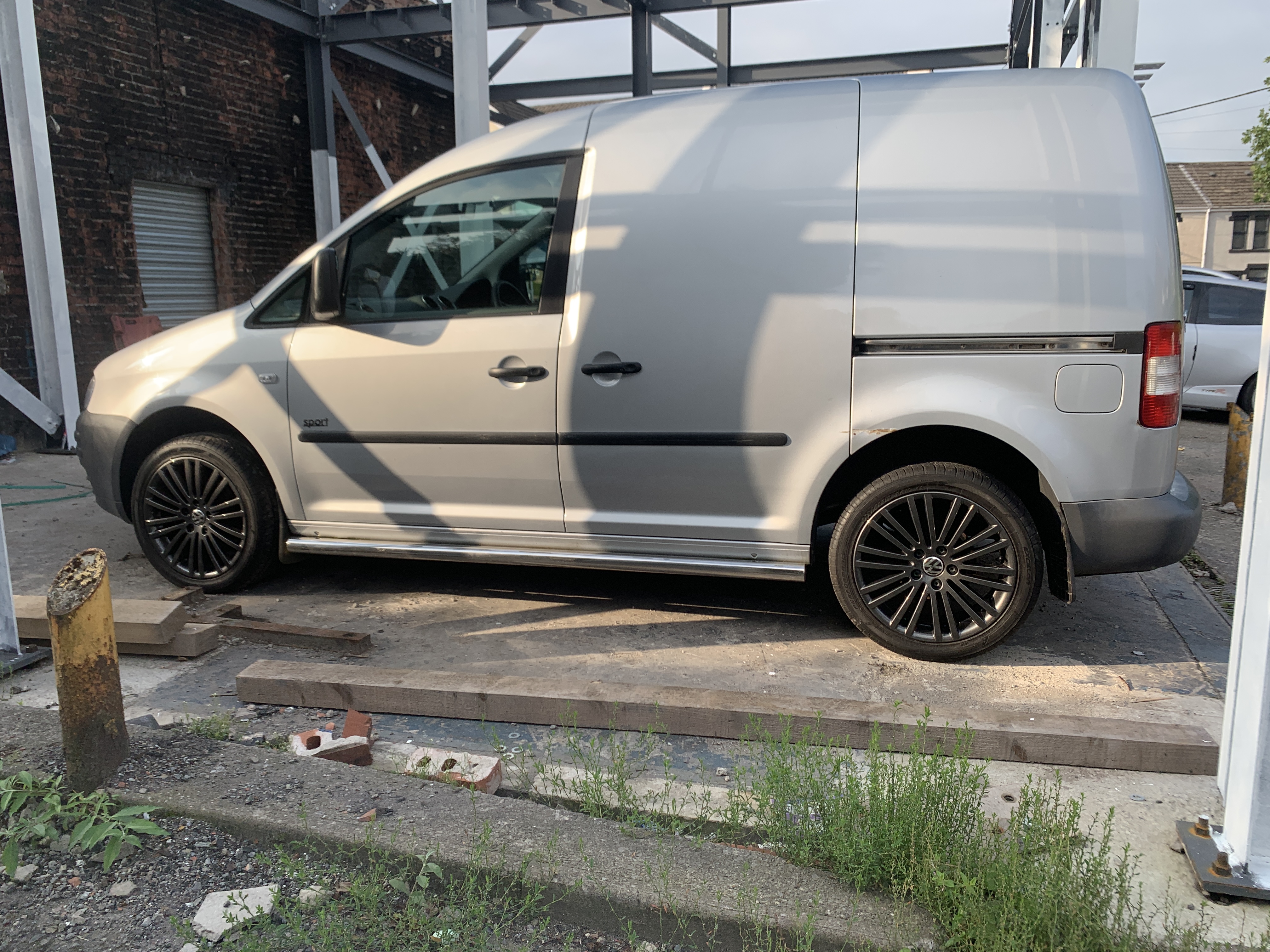 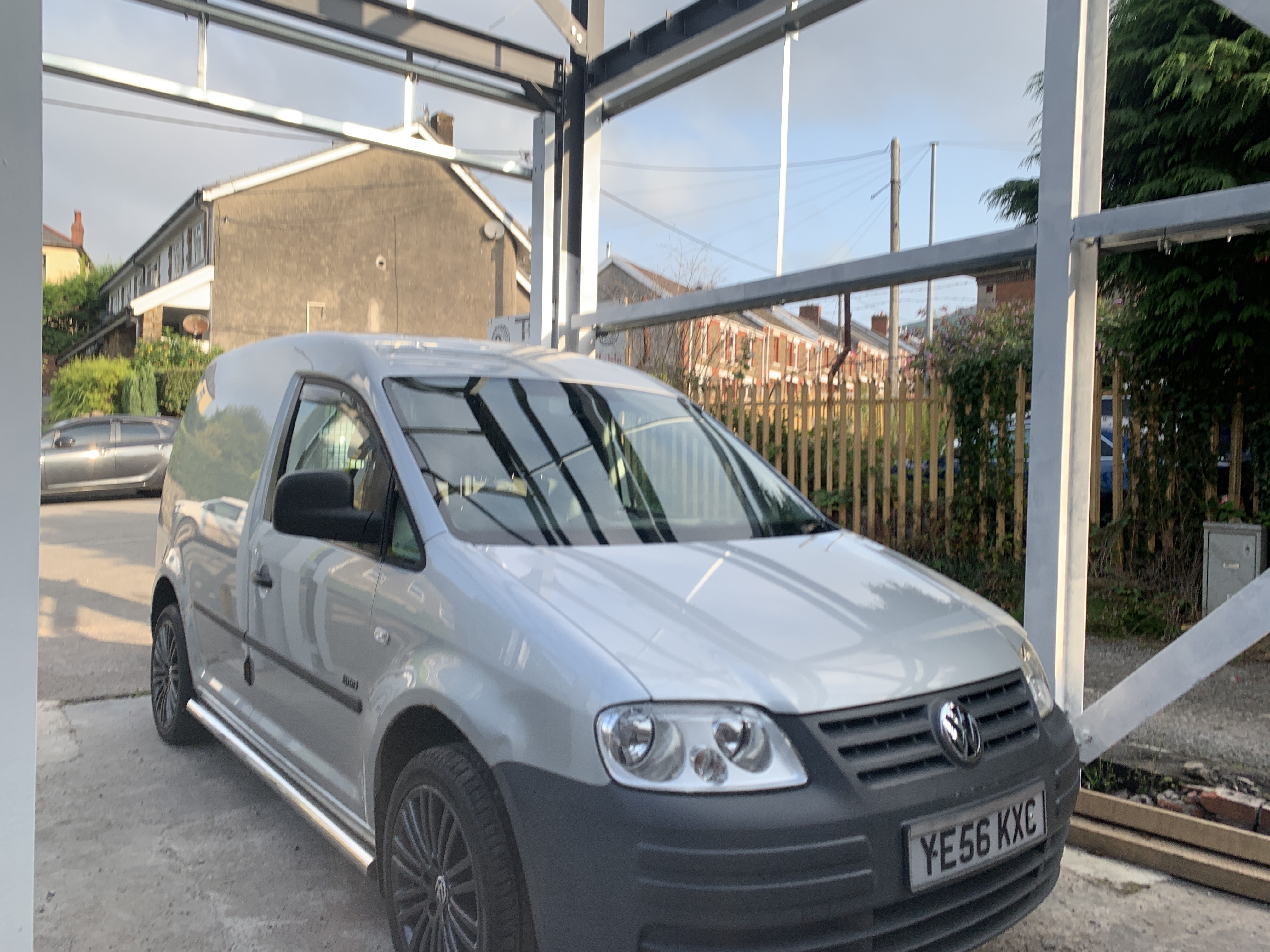 Next job was to remove the bulkheads then start carpeting the wall panels and another wiring job where the PO’s dog had entered the door THROUGH the plywood and ate the wiring!

New carpet ordered along with some Noico Alubutyl from Amazon.
Progress this far is just the following pic. 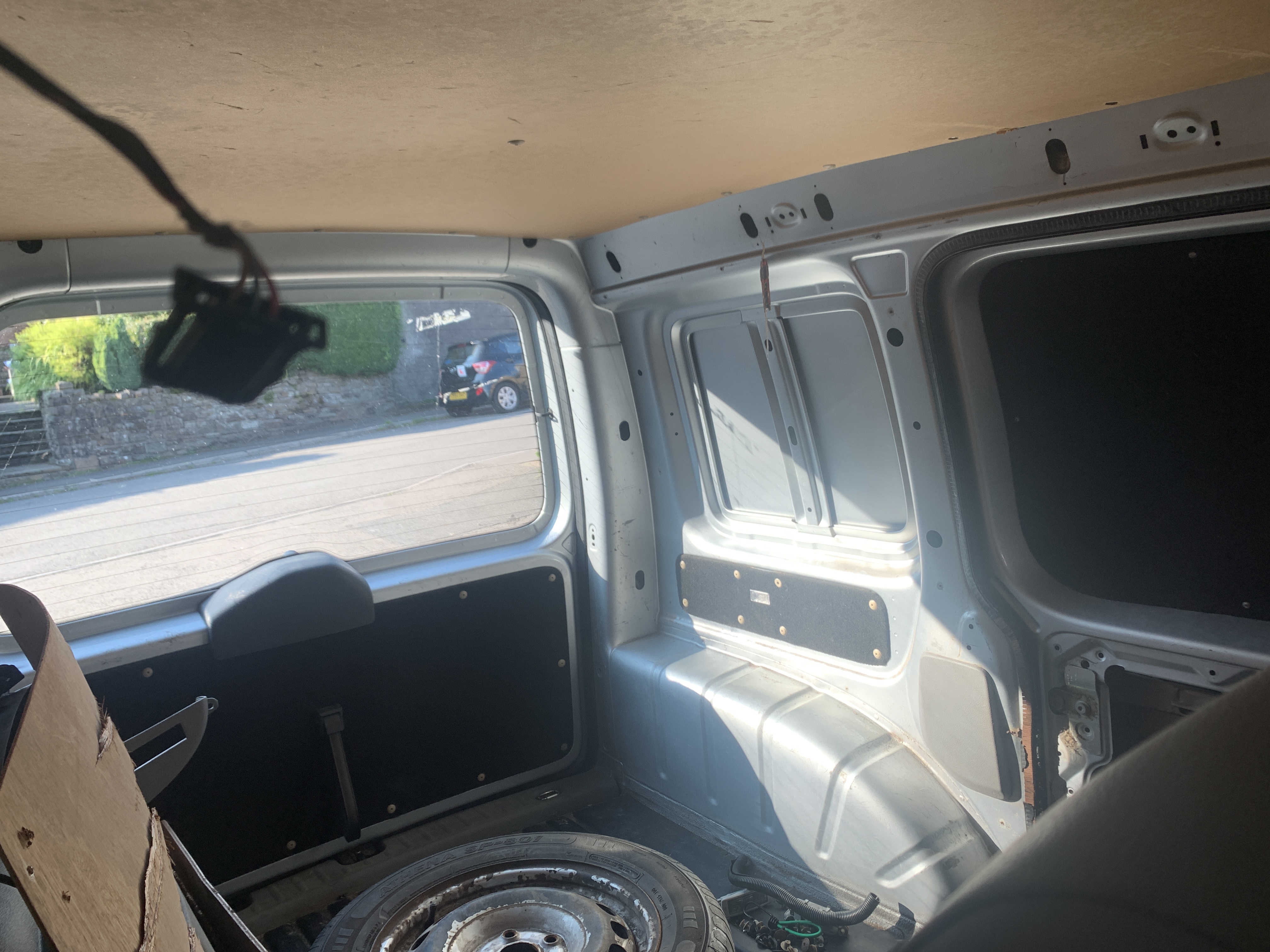 Cheers RY, Going to check out some Touran front and middle seats tomorrow, think the guy still has the carpet and door cards too so hoping for a deal.

Sod off, If I can get some return it comes off the price of the van

Just spent a few hours trying to hack out the front of a Touran floor pan. Managed to remove the rear plate by drilling the spot welds. Front one was a real pain in the butt! Should be able to unpick it easier on the bench in the garage! 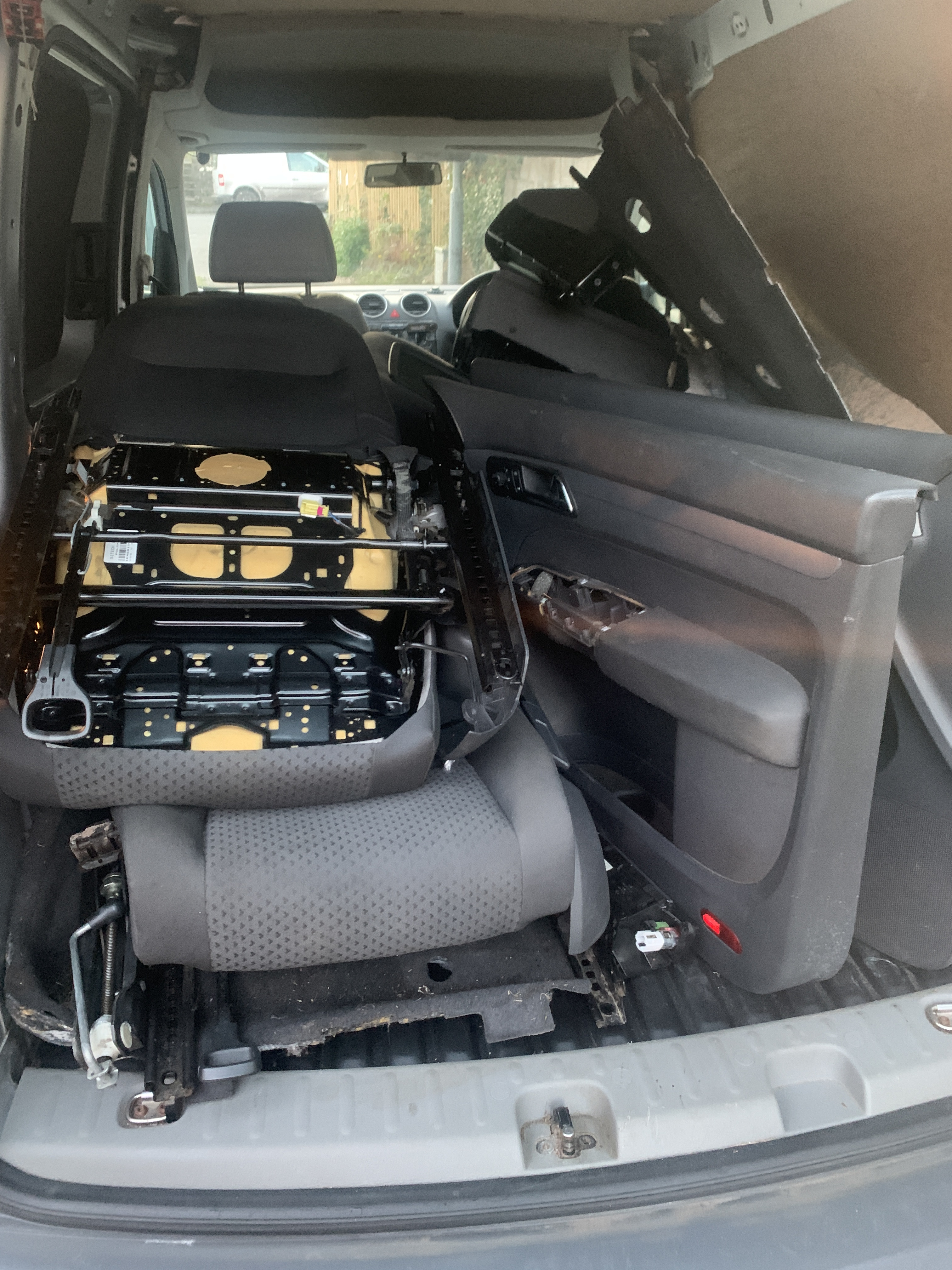 You can use www.ibb.co , set up an acct, for free, then upload pics. There will be options then to copy codes for bulletin boards etc then just copy and paste.
Just ask if you need assistance.

That’s fine Nath, I’ve been up the garage unpicking the spot welds from the Touran floor clip.
So much easier having the clip in front of you to see where it’s spot welded. Found it easier using a 5mm drill then using a step drill to attach the spot welds. A spot weld drill is ok but if the plate beneath is sacrificial then it don’t matter. 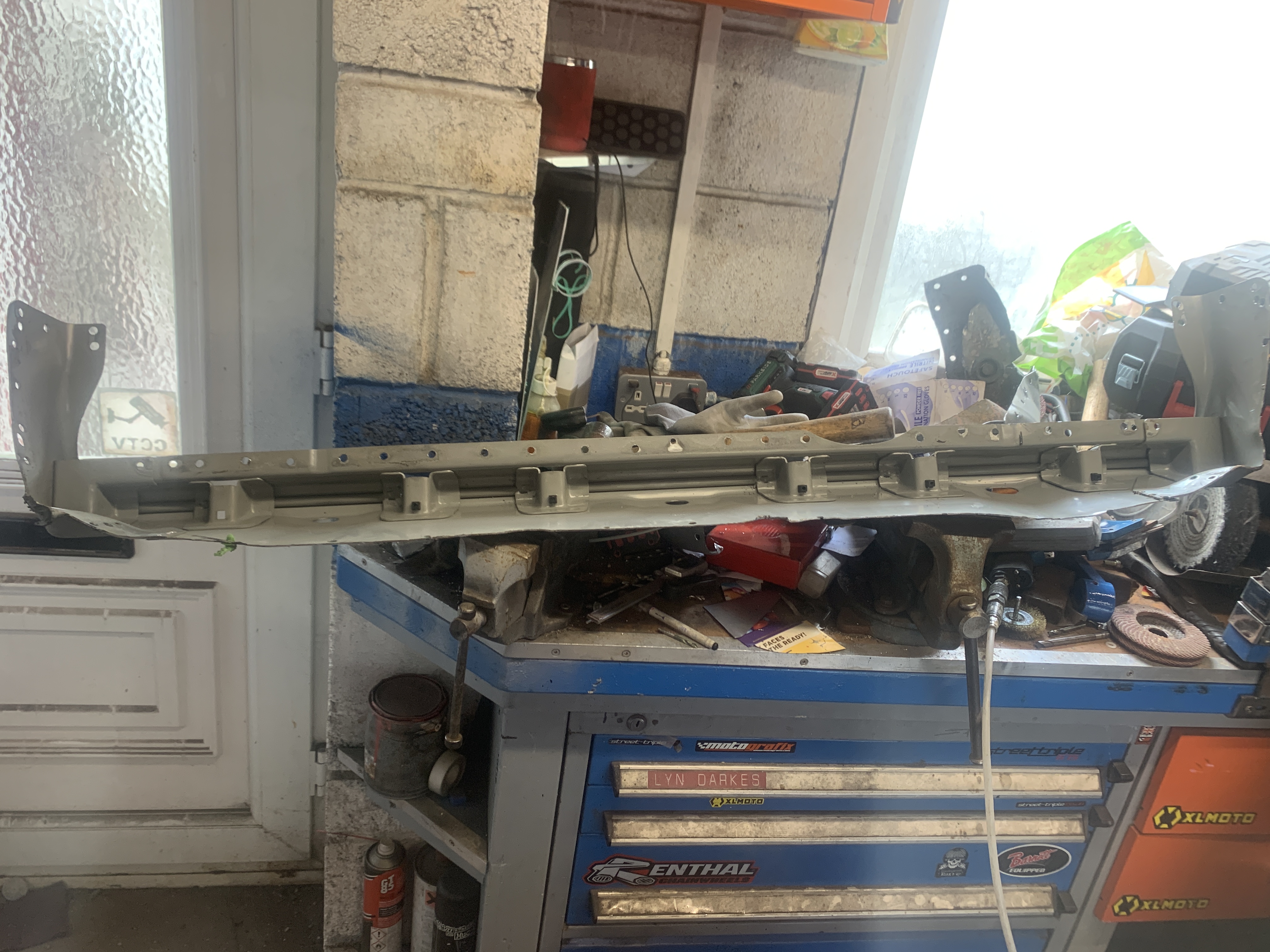 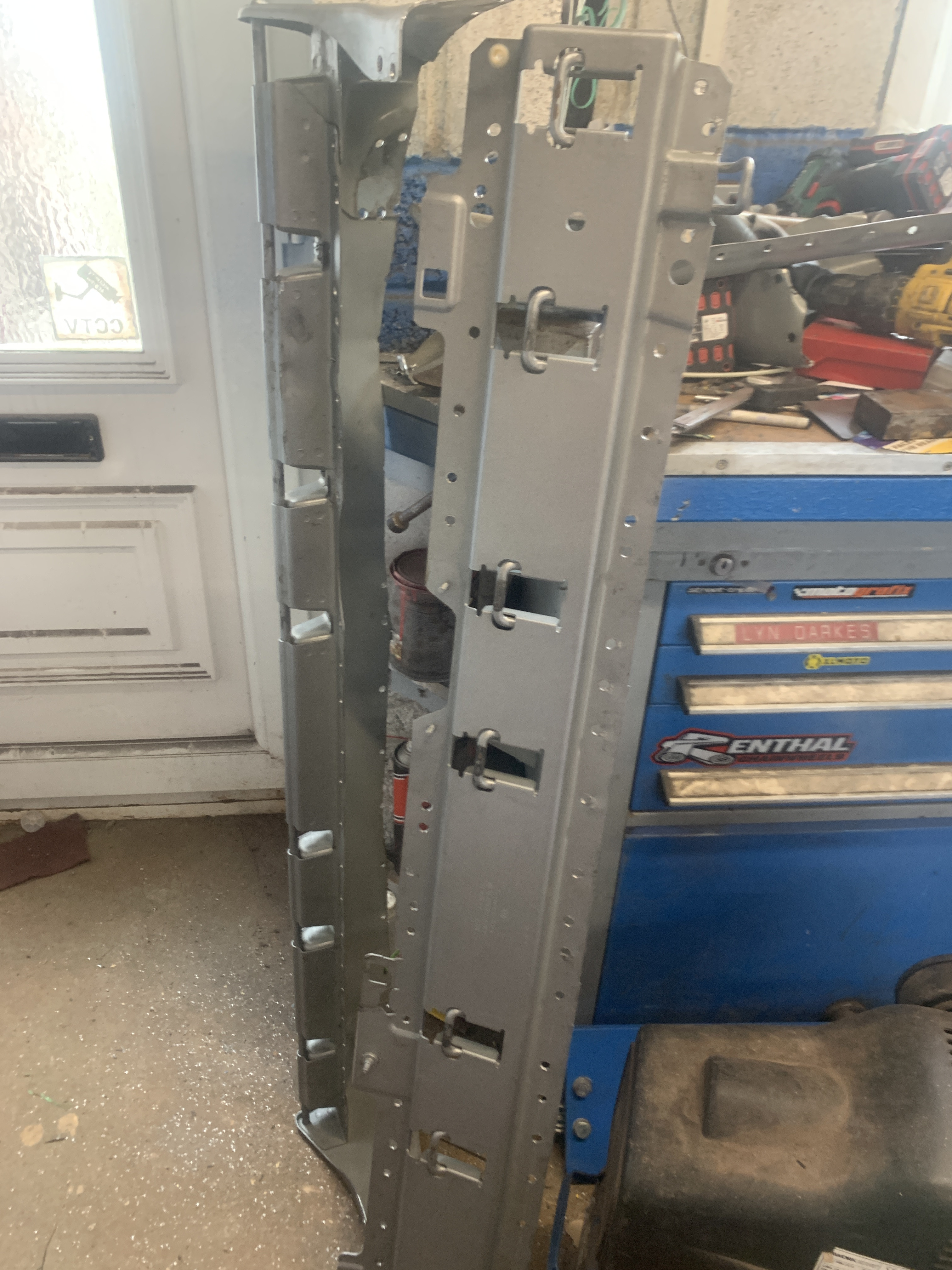 Looks so much better with all that removed. Great start to a build; definitely one I’ll be following, keep it up