Collected my new Caddy on Sunday

Made it less than 75 miles, on the M25 when.... you've guessed it, shuddering, warning lights and loss of power

Luckily I was at a section where there was a hard shoulder/emergency lane to head for. AA called who sent a local recovery service to move it due to the dangerous location. Got taken to the nearest services. Whilst I was waiting for recovery there were a couple of close passes by fast moving lorries, I wasn't entirely sure if I minded if it ended being punted down the road. Made it to the services. 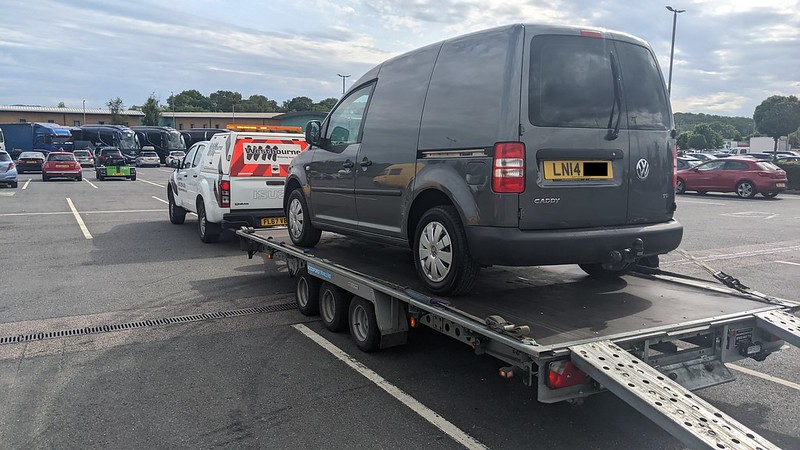 Got unloaded next to an AA van working on another car. Plugged in and injector 4 open circuit. Waited for another AA man who changed the injector, coded it and checked for leaks, good to go. Left the services and there was a slight smell of diesel but I thought this might just have been from taking the pipes off. Turns out the return/leakoff pipe wasn't properly clipped in diesel was leaking over the engine

Hopefully it can only get better from here. Lots of plans for the van but it comes with a 3 month warranty so I'm might hold of anything major until that's run out just in case.
Last edited by seaniow on Fri Jul 08, 2022 12:19 pm, edited 1 time in total.
Top

This is the trouble with these bloody injectors when they go it's normally in the worst possible place. Feel your pain, mine went a little further on by the m11. Sowed the seed pretty much there and then I was going down the tfsi conversion route.

Sent from my SM-G981B using Tapatalk

I'm just glad there was a hard shoulder to head for, if it had been a few miles before it would have been on the smart motorway section with nowhere to go.

I'll thy and put it behind me and get on with enjoying the van, I'll have to keep at as I've started collecting parts for the upgrades, I was on my way to pick up these when it broke down. 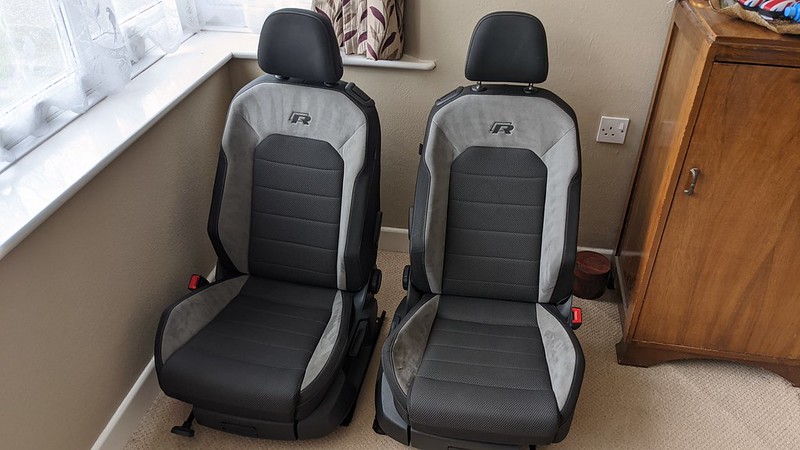 I live on the Isle of Wight so as I was on the mainland with a van it seemed the ideal opportunity for pick up some new seats. I need to repair the bolsters but shouldn't be too tricky, it's the usual foam failure inside.
Top

Glad you got it all sorted. Could've been a whole lot worse. Hopefully happy caddy moving forward

Sent from my SM-G781B using Tapatalk

Firstly, amended the title so I won't be reminded of the injector failure every time I add to this thread for years to come

Made some progress on the seats. Stripped them down, it was just a matter of working out how they are assembled, to end up with the base on it's own. Removed the foam from the base and took off the cover, which required cutting the hog rings. Ended up with just the foam with the tear clearly visible. 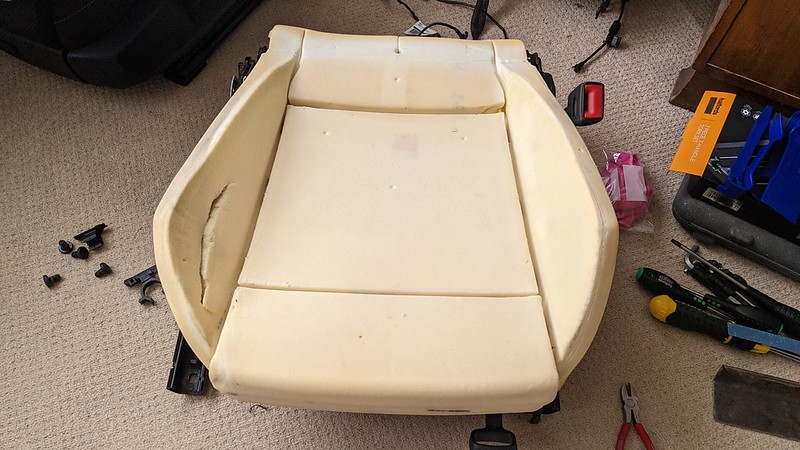 I had to make a tool to get the foam off the base as it wasn't possible to get anything else in to unclip the plastic retainers around the edge of the cover, it's the cover fixed to the base which holds the foam to the base. 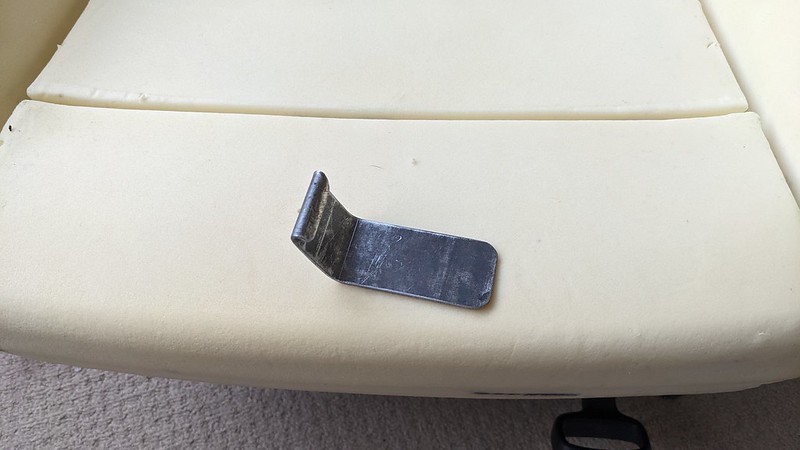 I glued the tear back together and also added a layer of fabric (in this case an offcut of VX21 from another project) to reinforce the bolster. I've also glued a section on the underside in the channel where the metal support bar sits inside the bolster. 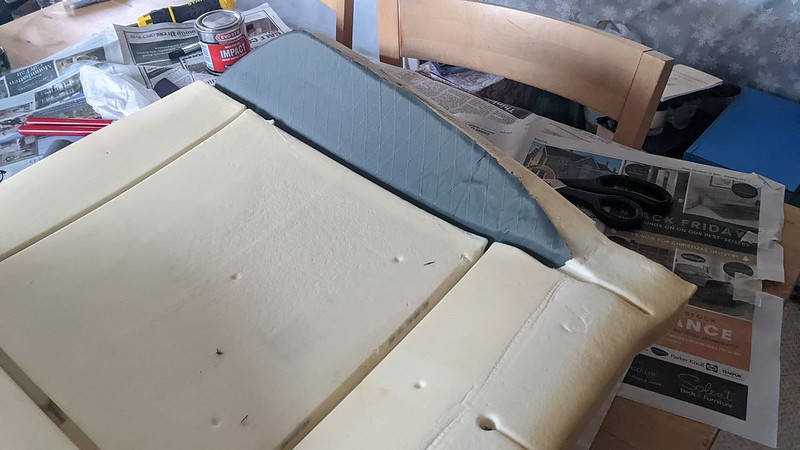 The fabric being colour matched the Caddy is just coincidence

Then it was just a matter of putting the cover back on and fixed in place with new hog rings and then clipping back onto the base. The bases are handed but the foams don't appear to be so I've put the drivers foam on the passenger side base so that the repaired bolster is towards the centre of the van and not subject to the same wear. First time I've even done any upholstery so prety pleased with the results. 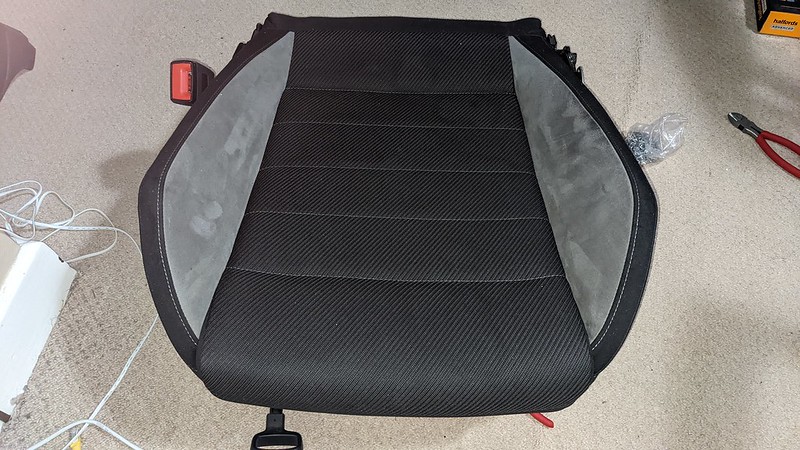 Just need to clean and reassemble with the rear section and trims etc. Parts have been arriving on-mass so should be some more updates soon.
Top

It's been a busy few weeks working on the van so not had chance to update the build. The lower engine mount was shot so changed that, which meant taking the sub-frame out, so gave it all a clean at before refitting. 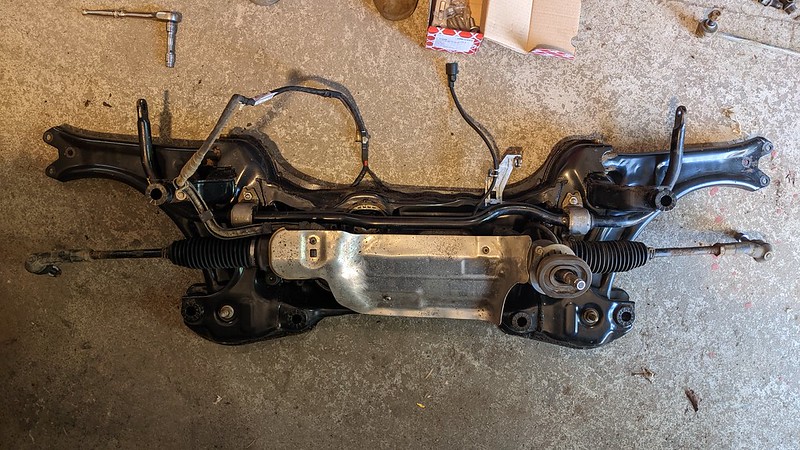 Had to make some tooling to press the new bushes in the sub-frame, basically a close fitting sleeve to press them through so they stay round and don't catch when the cut-out section gets to the lip of the sub-frame

As the van was in the workshop it seemed the ideal time to just tear into it and do some upgrades. New speakers in the doors and added tweeters in the dash top. Added some sound proofing to the doors whist stripped down. 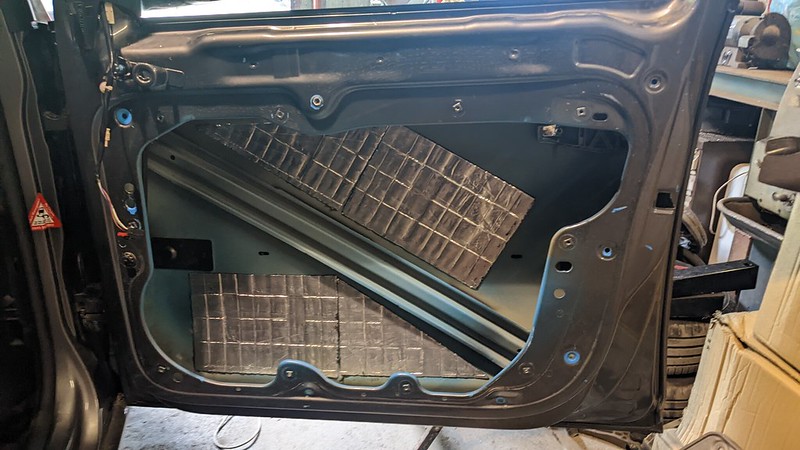 Took apart most of the trim as I was fitting Touran carpets, new head unit and running wires for the reversing camera, gps aerial etc. 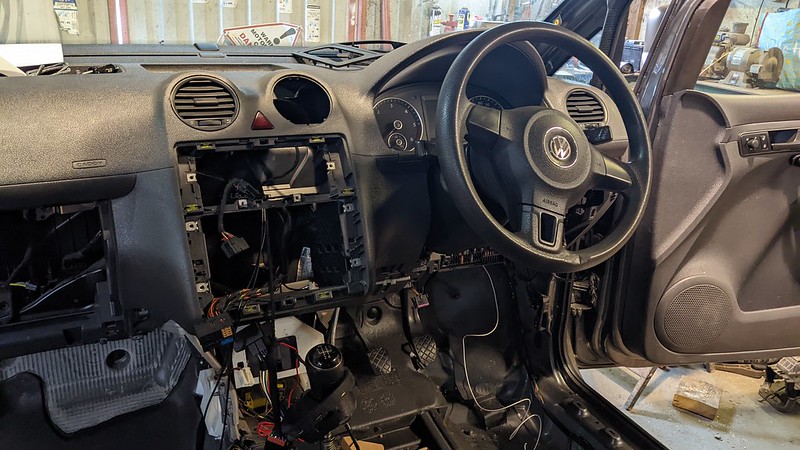 I had the pillar trims off to run the cable for the phone mic up to the interior light. Whist the storage box was off it wasn't much more work to take the headlining out to try and clean it. These things escalate quickly 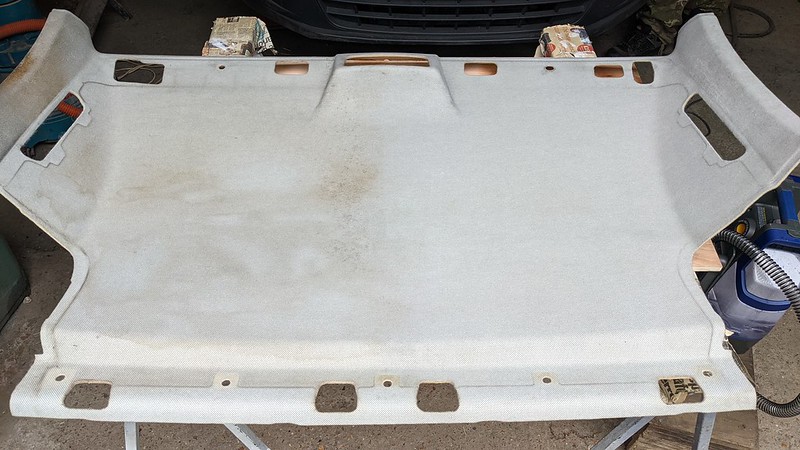 Half way through and it is better if not perfect but it's nicotine stains I think. Careful use of APC and the spot cleaner to vacuum off the moisture. The storage tray covers most of it. 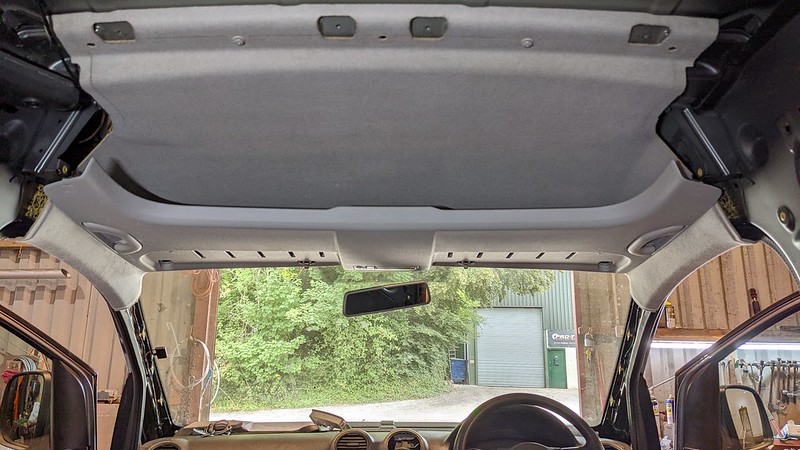 The side step trim at the sliding door had mortar and cement on it. Working on the basis that brick acid is in a plastic tub and that's mot dissolved I used some (carefully with gloves and goggles on) to dissolve the mortar of the trim. 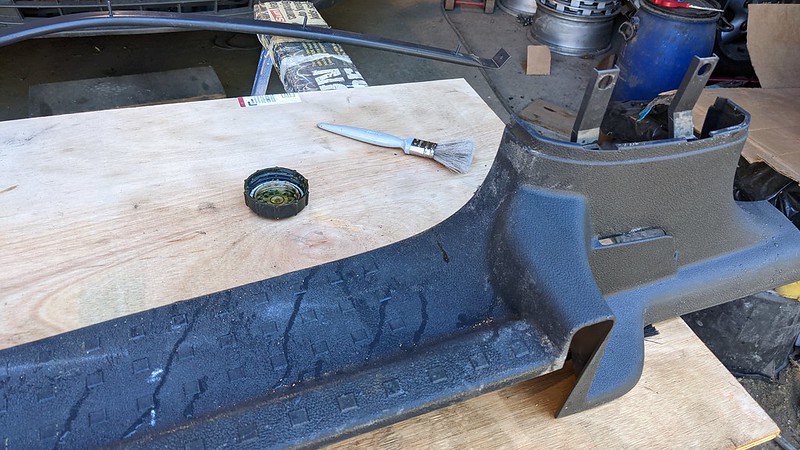 I've added some sound proofing to the rear and also some insulation. 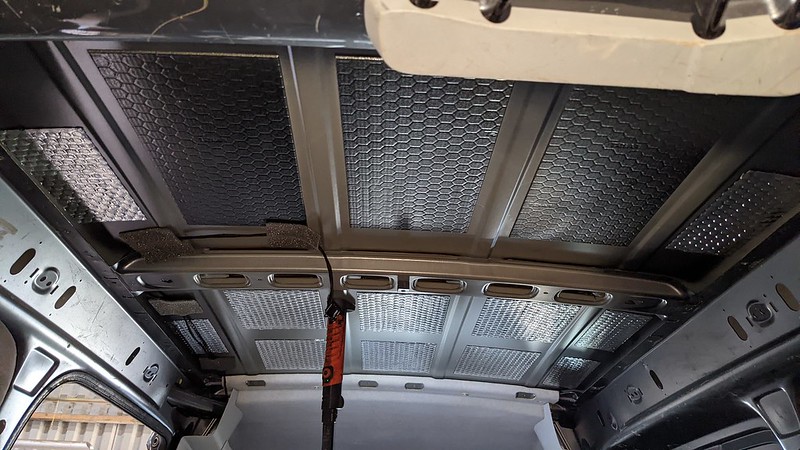 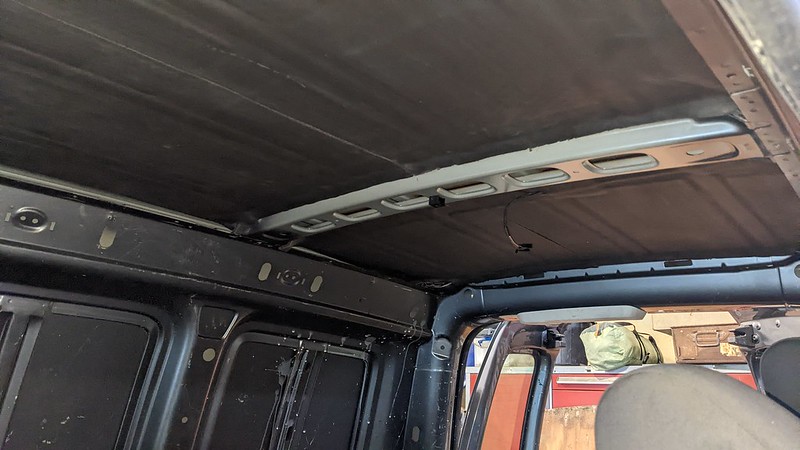 All of these jobs were necessary but not very exciting. Fitted the R seats which have transformed the driving position. I re-used the Caddy bases and drilled to suit. It's a bit of a pain as the hole for the locating pin is inline with a stiffening web. With a hand drill this would be harder to do but a 3 phase pillar drill made light work of cutting a slot down the web. 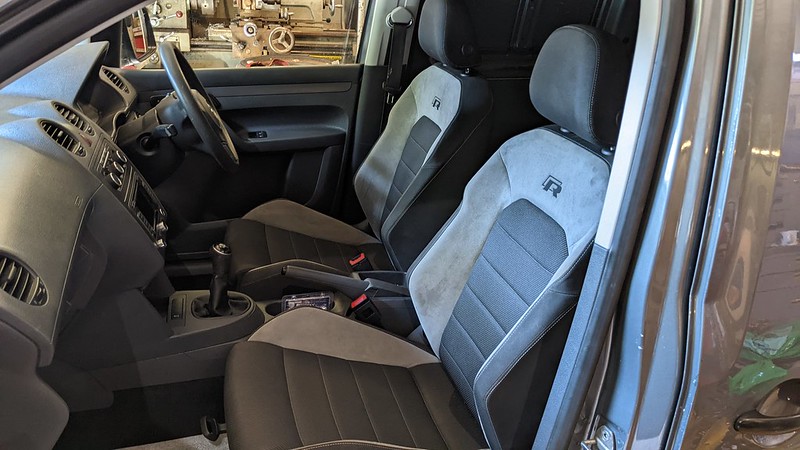 I also fitted coil-overs and flip kit whist it was up on the stands and some new wheels. Managed to get it mobile by last Friday before the hosepipe ban kicked in here. Got it washed off as during the 3 weeks in the workshop quite a layer of dust had settled on it, the workshop I rent is on a farm and the area outside is old concrete and dirt so with the workshop door open quite a bit blows in but even with the door open it was 35 degrees inside so I wouldn't be able to cope with the heat if I kept the doors shut.

It's being tracked up today at the garage opposite my workshop and I'll collect it after work, Rally chuffed with how it's turned out so far and quite a transformation from how it looked on the back of the trailer being recovered off the motorway 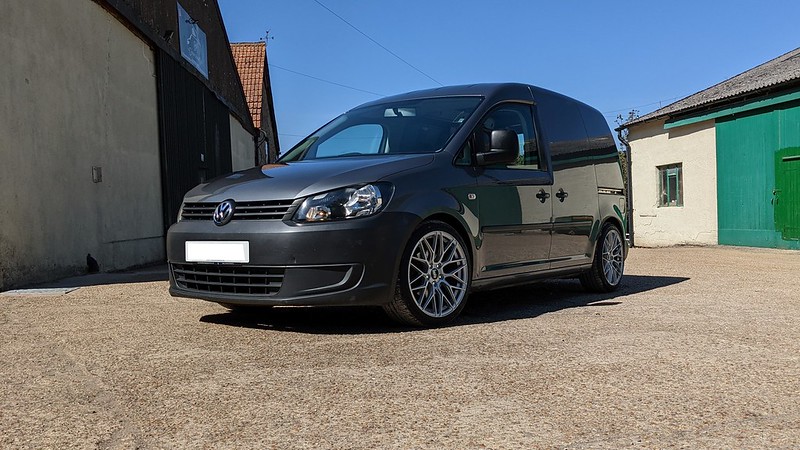